Defenders: What You Need To Know 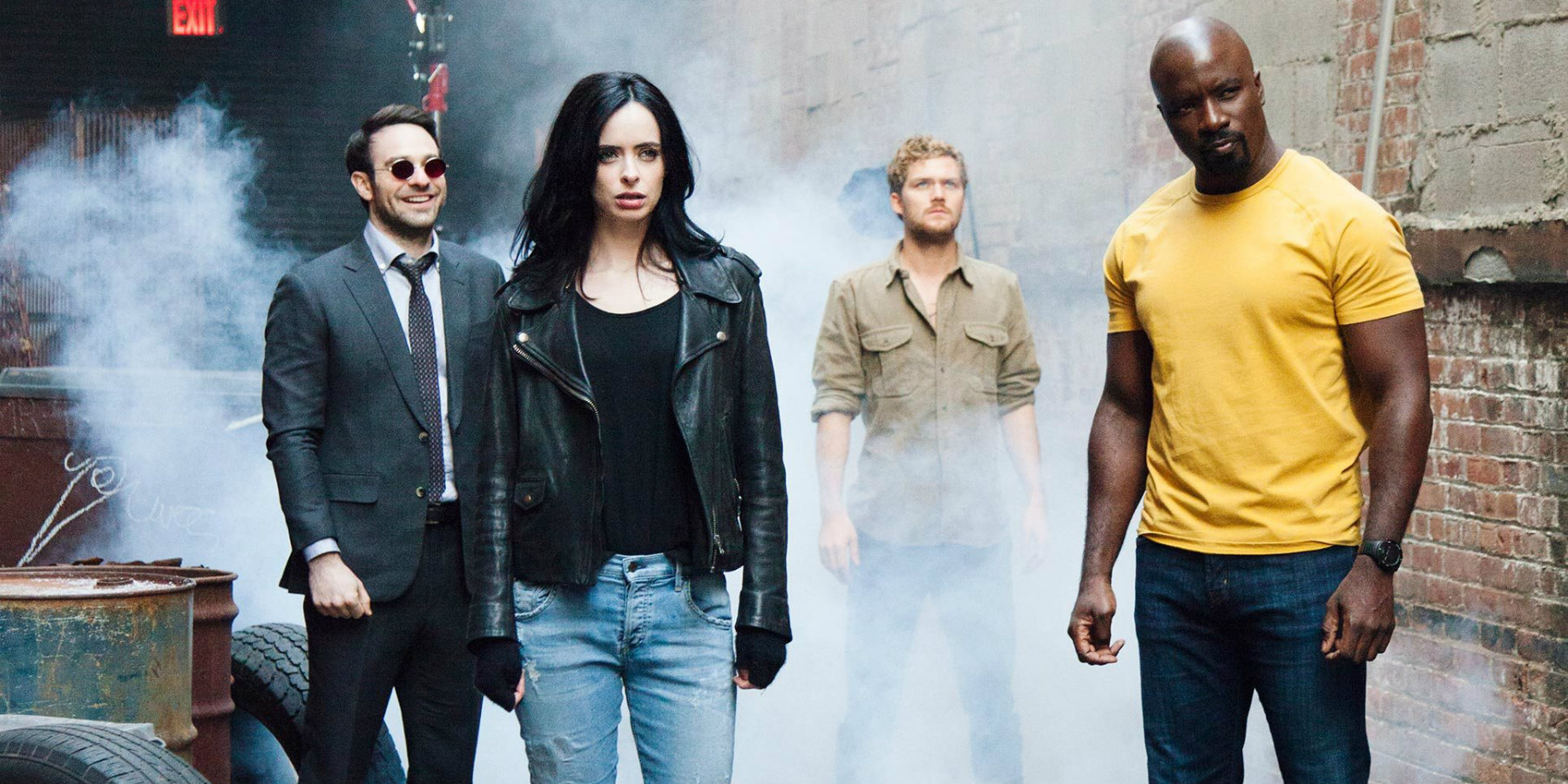 Having just spent the last five days talking Defenders lead-up, it’s occurred to me that it might be helpful to provide a useful summary post containing the plot points required to set up the crossover series itself, for those interested in watching it who may have missed one or more of the seasons leading in. This may or may not have occurred to me because of the direct request of such a person. I can’t possibly comment.

What I can say, and what should really go without saying, is that there will be significant spoilers ahead for every Marvel Netflix series leading up to Defenders, as well as possibly for other Marvel Cinematic Universe elements. Consider yourselves warned, and proceed at your own risk.

Without further ado, here’s everything you need to know!

• Matt Murdock is a blind attorney who has trained in martial arts and possesses superhuman senses to compensate for his lost vision.

• He had a law practice with best friend Foggy Nelson, a partnership which broke up due to Murdock’s double life and inattention to a high-profile case. Foggy now works for high-powered Manhattan attorney Jeri Hogarth.

• He previously had a relationship with the law firm’s secretary, Karen Page, now a reporter. They were on the ropes, but may be heading for a reconciliation after he shared his secret identity with her.

• Daredevil’s most prominent enemies are Wilson Fisk (the Kingpin), currently incarcerated but in effective control over the prison he occupies, and the Hand, an order of ninjas who once worked with Fisk and have been stealing the blood of children for use in dark mystical arts.

• Murdock was trained in martial arts by Stick, an ancient blind master who serves the Chaste. The Chaste are the adversaries of the Hand.

• Murdock was raised Catholic, and his guilt over the violent life he leads (and the satisfaction he feels from avenging injustice in such a brutal fashion) drives him to seek confession with his parish priest, who may or may not have a sense of who Murdock really is.

• Murdock is acquainted with a local nurse, Claire Temple, who knows his secret identity and helps patch him up after fights. Temple was later involved in an attempt to help several kidnapped children escape from the Hand, but corrupt elements in the hospital system were able to alert the Hand and remove the children. Temple quits her job when the hospital attempts a cover-up of a coworker’s death during the Hand’s attack.

• Murdock’s onetime love interest, Elektra Natchios, returned to his life in New York City. A skilled martial artist in her own right, Elektra discovered that she is actually a project of the Hand, a living weapon dubbed “Black Sky.” Elektra was killed by agents of the Hand and her body stolen away, apparently for resurrection via mystic arts.

• Murdock fought against Frank Castle, aka the Punisher, a more ruthless vigilante who believes in killing criminals to prevent recidivism. The Punisher is currently at large, possessing military-grade body armor and an arsenal of deadly weapons. He and Daredevil are not directly aligned, but each recognizes the other has the same broad goals.

• The Hand desired to obtain a large parcel of land in the heart of New York City, which they have worked to hollow out into an incredibly vast pit. The purpose of this pit is as yet unknown.

• Jessica Jones is an orphaned superhuman. A chemical accident gave her extraordinary strength and increased durability.

• Jones was for years the favorite victim of the supervillain Kilgrave, an amoral sociopath with the power of mind control. She developed an immunity to his powers and worked to find him and kill him to prevent him ruining any more lives. She eventually succeeded; Kilgrave is dead.

• Jones had a short sexual relationship with Luke Cage, which ended when she revealed that she was the cause of his wife’s death. Under the influence of Kilgrave, Jones punched Cage’s wife hard enough to kill her.

• Jones was hired by Joy Meachum to dig up dirt on the Rand Enterprises board of directors.

• Jones was forced to fight Luke Cage, who came under the influence of Kilgrave. With her strength, she was able to cause internal contusions despite his unbreakable skin, requiring the creative efforts of nurse Claire Temple to save his life.

• Luke Cage, real name Carl Lucas, is an ex-convict. Framed by his half-brother, Lucas was subjected to violence in prison and saved from death by way of an experimental treatment that gave him superhuman strength and unbreakable skin.

• Luke Cage escaped from prison and married the therapist who treated him during his incarceration, Reva Connors. He later discovers that Connors was a knowing participant in the abuses at Seagate Prison and funneled him into the underground fighting ring that nearly claimed his life.

• Cage is arrested for his escape from Seagate Prison; files capable of exonerating him for the original crimes for which he was framed were found and destroyed by Mariah Dillard, a corrupt city councilwoman serving Harlem.

• Cage battled his half-brother, Willas Stryker, now a mob boss and gun-runner for illegal Hammer Industries weaponry under the name Diamondback. Stryker introduced the police of New York City to the Judas Bullet, a weapon made from salvaged Chi’tauri metal that can chew through Cage’s impenetrable skin.

• Cage had a brief sexual relationship with Harlem police detective Misty Knight, who was tasked with investigating a gun-running transaction gone wrong and got onto Cage’s trail. Knight’s experiences with the corruption inside the police department have made her more willing to explore efforts to pursue justice outside the normal limits of law enforcement.

• Cage entered into a relationship with Claire Temple, a nurse. At his arrest, she promised to put him in touch with an attorney she knows. This would be Matt Murdock.

• Danny Rand is the orphaned heir to the Rand Enterprises fortune. Thought dead along with his parents in a plane crash ten years ago, Rand has returned to New York City and become a wealthy public figure.

• Having studied with Buddhist monks in the mythical city of K’un Lun for the past decade, Danny Rand was chosen to take on the mantle of the Iron Fist, mystical guardian of K’un Lun. He confronted a dragon in a trial to gain his abilities, and can channel his chi into his fist to deflect bullets and shatter walls with the force of his hand. He has also learned to heal wounds with this ability, though overuse of his chi taxes and drains him.

• In addition to this supernatural power, Danny is a skilled martial artist, considered one of the most talented in the world, although he lacks combat experience.

• Danny has come to New York to rediscover his roots, but also to battle the Hand, who have been using Rand Enterprises to conceal their activities for some time. The Hand influenced the Meachums, the executives of Rand Enterprises and Danny’s childhood friends, to secure a crucial dockside purchase for them. It is likely that the Hand will use this property to import forces and resources for the conflict to come.

• Danny isn’t supposed to be in New York; the role of the Iron Fist is to guard the gates of K’un Lun. Nothing bad will definitely happen to the mythical city by the end of this season because he decided to faff off back home.

• The Hand’s leadership includes Madame Gao, an adversary of Daredevil and associate of Wilson Fisk who possesses mystical abilities, speaks every language, and comes from a land that may be as mythical as K’un Lun. She has definitely been to that city at one point, and will be part of the conflict to come in some fashion. Madame Gao has shown the ability to punch Daredevil across a room and defeat Danny Rand with the flick of a hand.

• A different branch of the Hand is lead by Bakuto, a charismatic martial artist who recruits street kids to become part of his organization. Having placed many high-level graduates in important positions across the city, Bakuto commands unquestioning loyalty from his students, to the point that they are willing to murder one of their own for defection. Left for dead by Danny, Bakuto has survived and escaped.

• Danny’s love interest is Colleen Wing, a former student of Bakuto who came to see the evil in her teacher. A martial arts instructor, she runs her own dojo and has Claire Temple as a student and personal friend.

• Danny employs the services of Jeri Hogarth in legal matters. Hogarth was a former junior employee of Rand Enterprises when Danny was a child, and he refers to her by the youthful nickname “J-Money.”

• Danny’s efforts to be a kinder and more public-conscious CEO earned him a profile by reporter Karen Page.

• Danny and Colleen traveled to K’un Lun after the events of the series, only to discover that the mystical city has vanished, leaving a vast pit in its place. Oh no where could it have gone and who could have seen this coming Daniel.

• Danny is incredibly stupid and his show is terrible.

• The Avengers have recently closed up shop in New York City and relocated to Buffalo. With several members and associates currently incarcerated, they are unlikely to intervene in anything that isn’t a large visible space catastrophe. So, you know, not until their next movie.

• Spider-Man is operating in Queens. Still a neophyte hero, he’s not skilled enough to contend with an army of immortal ninjas and is also probably grounded after his aunt walked in on him changing. Into his vigilante suit.

• ABC runs several series that nobody pays attention to. We’re going to follow their lead and pretend those series don’t exist. We’re not going to lose a lick of sleep over it.

• This is all an elaborate way of saying that if anyone relevant from outside the Netflix framework shows up, it’ll be an exceedingly large surprise.