Defending You From The Defenders 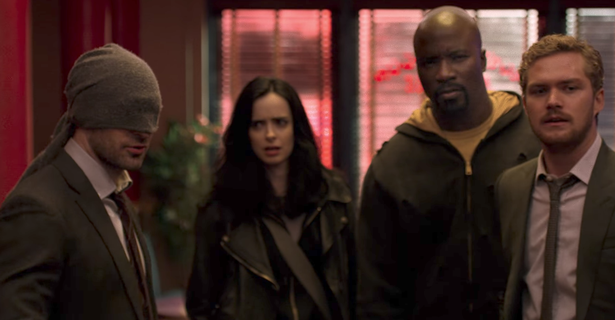 Let’s face facts: eight hours is a fair chunk of time to devote to a series when you’re not sure you’ll like it, and The Defenders hasn’t exactly been on the receiving end of stellar reviews. I watched it all, and I’ve posted a full review already, but for those who might be curious but aren’t willing to make a commitment, I’m ready to do you one better.

This post will be a direct and clear summary of exactly what The Defenders is, chock-full of spoilers galore to get it all out of the way. If you just want to fill in the blanks and watch the chunks that are most relevant to you, perhaps featuring the characters you most enjoy, this should be helpful in some fashion.

If this does NOT describe you, DO NOT CONTINUE READING THIS ARTICLE. THIS ARTICLE IS NOTHING BUT SPOILERS IN A PARTICULARLY GLIB TONE.

That’s a good enough warning, I feel; the rest, as they say, is on you.

• Danny Rand the dumbest man in the world and his girlfriend Colleen Wing are in Cambodia hunting the Hand. The man they wanted to see gets chopped in two by a mysterious female assassin who we don’t see clearly.

• Matt Murdock is done Daredevil-ing and not really happy about it. He wins a court case and tells his client that money won’t buy happiness. Then he meets Karen Page, ex-girlfriend, who likes him for his honesty and also for his not being Daredevil.

• They will not get back together, because he’s about to Daredevil again. Now you know.

• Luke Cage is out of prison. Foggy Nelson got him free. He meets his girlfriend Claire Temple. They have “coffee.”

• Detective Misty Knight wants Luke to help out Harlem some more. Not in the way that a bulletproof superstrong man is inherently capable of, that would be illegal or something. Instead by counseling troubled youths.

• The troubled youth doesn’t want his counsel and ends up in prison and then dead. Now you know.

• Jessica Jones is not-coping coping with being a murderer and having to rebuild the scraps of her boozehound life after the destruction of Kilgrave. She’s been avoiding taking on new clients and has instead been taking on the concept of last call by staying at bars so long that she finds out what morning looks like through a beer-stained window.

• She gets approached by a new client to find her missing husband and doesn’t want to take the case. She takes the case anyway and finds a bunch of C4. Now you know.

• Jessica meets Misty Knight when she calls the cops about the C4. She goes back to her office where the missing husband is threatening her assistant because he’s scared of the Hand. The Hand’s mysterious female assassin (still Elektra) shows up and he kills himself. Jessica gets arrested for stealing some C4.

• Hand head honcho Alexandra finds out all her organs are failing and there’s no treatment. She’s got “weeks, maybe months” left to life. She summons Madame Gao and advises her that “the plan” has to have its timetable moved up. Madame Gao says this is dumb because it will attract unwanted attention. Alexandra doesn’t care. This will definitely not result in four heroes ruining her plans within the next week.

• There’s an earthquake! Everyone cares about the earthquake, and then everyone forgets it except Trish, who doesn’t appear much. Why was there an earthquake? Unspecified.

• Apparently the Hand’s earthquake wasn’t groundbreaking enough as what they want is sealed by the power of the Iron Fist. Guess who they need to capture alive? I’ll give you a hint, he’s really dumb.

• Luke Cage tracks down the troubled teen and finds out he’s been working cleanup for Hand murder operations. This is Bad.

• Dummy Rand tracks down possible allies, and all of them are very dead and getting coated in cleanup nonsense by troubled teens from Harlem. He tries to chase one down and beat him up but is stopped by Luke Cage. They fight and someone gets an Iron Fist to the face.

• Luke tells his girlfriend that he got beaten up by a man with a glowing hand. She’s like “ah crap, I should introduce the two of you so you can lecture him about not punching people who interfere with his privileged imbecile parade.” She does and they don’t like each other.

• Matt Murdock is Jessica’s lawyer and gets her out of interrogation. They don’t like or trust each other and he stalks her to keep her out of trouble so she stalks him to figure out why he’s stalking her. They both end up at Midland Circle.

• Iron Fist is still smarting from getting told off and decides to go after the head honchos instead of the gruntwork guys by putting on a suit and tie and marching into Midland Circle to threaten the board. This doesn’t go well.

• Luke Cage hears that his troubled young friend has been killed in prison and discovers a pay stub labeled Midland Circle. He goes there just in time to save Iron Fist from some number of poison darts.

• The four superpeople fight their way out of a hallway and get chased by the Hand’s superweapon, boring swordswinging mildly superhuman assassin Elektra. They call her Black Sky because literally no good reason.

• They retreat to a Chinese restaurant and bribe the owner by asking for a full meal platter. Demonstrating greater understanding of Buddhism than Danny Rand, he makes them one with everything.

• Daredevil acts like Jessica can’t just tell the other two his real name. Eventually he stops being an overgrown manchild. Danny could theoreticaly learn from his example but chooses not to.

• Stick shows up. Remember him? He tells us the Iron Fist is cool and Daredevil was always going to fight the war and the four of them are a team wait where did Jessica go ohhhh she left because everything they’re saying is stupid and doesn’t pertain to her job at all.

• Alexandra shows up at the restaurant to make friends and kidnap an Iron Fist. Oh honey, all you had to do is tell him don’t go down a big hole and punch a rock and he’d do it out of pure stunned childish contrariness.

• Jessica discovers records that indicate Alexandra’s immortal. She goes back to the restaurant. Everyone fights the Hand.

• The Hand brings the fight to the heroes in a big way and it’s not particularly relevant. Daredevil buzzes off to try and seduce Elektra back to the… is it the light side if you openly refer to yourself as the devil? That side. It doesn’t work.

• They threaten to do some horrible things to the Hand leader but basically Daredevil strangles him, Jessica punches him and no body parts are removed. Horrible things are obviously not their forte. Stick decapitates him, problem solved.

• The grownups in the room figure out that the Hand needs Danny alive for their plans. He responds with an intelligent and well-reasoned argument: “Nuh-uh.” This results in a fight, which results in an unconscious and deeply irate Iron Fist. Stick and Luke Cafe keep him in custody while the other two go figure out how to stop the Hand.

• They figure out there’s a big giant pit below Midland Circle. Remember the big giant pit that K’un Lun left behind when it apparently vanished?

• K’un Lun did not get moved underneath Midland Circle. Now you know.

Handy Notes On The Hand

• The Hand was founded by five people from K’un Lun who learned chi mastery for healing purposes but twisted it to extend their lives instead, getting exiled for their troubles.

• These are Alexandra, the white lady who thinks Black Sky is the answer to everything even though they admit she basically made it up.

• Bakudo. Why? None of us will ever stop asking that. Why, though? See previous.

• Murakami, a man who insists on speaking Japanese despite clearly understanding everyone speaking to him in English, like he’s Jabba the Hutt. He’s played up as a really evil guy but basically has the powers of being a generic Hand ninja and having been Nobu’s boss. This means three Hand branches were operating separately in New York all this time and none of them were good at cooperating.

• Sowande, an African warlord who wears a white suit and has dangerous attacks that we never see because he gets ganked by Luke Cage. Black dude dies first.

• What do they want? “The substance,” which requires them to get through a sealed barrier beneath the Midland Circle building in New York City. They had a supply, but used the last of it making the Black Sky.

• It’s powdered dragon bone and it resurrects the dead. That’s what the substance is. Now you know.

And Now Back To Our Regularly Scheduled Programming

• Stick figures out that if he just kills Danny, no more problems. How nobody else has ever come to this conclusion before is beyond me, but there you go.

• Elektra stops him by cleverly stabbing him in the back and confiscating his Danny Rand. The other three plot to save him.

• Alexandra is at risk of a coup from her pals because Sowande is dead and she’s fixated on using this incredibly uninteresting Black Sky to solve all their problems. When Elektra shows up with Danny Rand in tow, Alexandra does her big I Told You So moment and gets stabbed for her trouble.

• Who then claims that she’s in charge.

• The katana master, the deadly hunter ninja, and the telekinetic witch are all too afraid to challenge this position.

• What a way to waste Sigourney Weaver, one of the few lynchpins keeping this show together.

• The gang gets arrested for having dead bodies nearby. Misty Knight wants them to let the cops help with the immortal ninja army’s secret hideout, but only if they explain everything. There’s a sort of issue with believability, so they opt not to.

• Instead they literally break out and go to Midland Circle to rescue Danny from Elektra. Colleen has the bright idea to steal a bunch of C4 and blow up the building, because this will stop the Hand.

• Danny fights Elektra, because that’s his solution to everything, because he’s a dumb child. She tricks him into breaking the seal by punching and missing.

• The Hand’s remaining fingers slow down the rest of the Defenders, then join Elektra downstairs for some dragon bone harvesting goodness.

• There’s a big final fight in the dark cave of dragon bones with a suspiciously even floor. It doesn’t look good or convincing.

• Daredevil decides he has to redeem Elektra again. It doesn’t take and they both stay behind in an explosion.

• Murakami gets ganked somehow because he’s a Hand ninja and therefore incompetent.

• Bakudo confronts Colleen because he’s got a weird fixation on the one student who defected and lived. They duel, Misty shows up, he chops off Misty’s arm to fulfill the rules of comic book setup, and Colleen chops off his continued existence in the MCU. Go Colleen.

• Bakudo sets off the bomb timer. Everyone who’s a hero gets out except Daredevil.

• Everyone grieves Matt Murdock except the audience, who knows Daredevil has already been renewed for a third season. Nonetheless, we have to wait some 20 minutes before the show admits this.

• And that’s how you saved eight hours of your life. You’re welcome.