Well my friends, it all has to do with a poor, provincial town in France.

In the first song of Beauty and the Beast, a rather desperate woman juggling babies pleads that she needs six eggs. The man holding them has but two chickens on hand and no more than ten eggs in his possession, yet other vendors have quite a lot of their own product on hand. Is he even a vendor? When we cut to him, he’s not standing behind a counter – he’s counting the eggs in his possession, which he clutches to himself defensively as she presses her basket forward.

What’s the matter with that? Later on in the movie, we watch as the village idiot wastes a good dozen or more throwing them up in the air. They can’t be that valuable, certainly. Hell, there’s a supply of eggs just kicking around in the local tavern. If anything, that’s bizarre, not an indication of some eggconomic downturn. Let’s put a pin in that for now, though.

The diet of the time was predicated on starches – bread was a big deal, as were soups and stews that made use of pulses, beans, and root vegetables. Pork was the cheapest meat, pigs being semi-domesticated and often available wild (see a scene during the Belle number in which a hog chases a child around), and most households would keep a couple of chickens on hand to provide a few fresh eggs every week, eggs being a valuable source of protein and calories at a time when meat was still not often had fresh out of season.

The presence of a meat vendor indicates that meat’s on the menu for the moment, but day-to-day people wouldn’t buy any more food than they needed to or could afford – and the only person we see shopping for eggs seems to be in dire straits at the time. Conversely, watching the woman buying meat… let’s say it doesn’t seem like a stretch to believe she might be receiving a discount on that product for one or two reasons.

Still, chickens are chickens; they’re not rare, everyone can keep a couple around, and eggs are a dietary staple in this era. Why would there be such a shortage that meat is seen as a more plentiful alternative? What one factor could so deeply disturb the egg supply?

Gaston has been putting away a truly eggstravagant amount of yolk his entire life, demonstrating a fairly wealthy background (parents with the resources to keep a young boy fully stocked with 48 eggs a day) and an unreasonable diet in comparison to the rest of the town. The modern breakfast standard is a classic two eggs, which would still mean Gaston eats the breakfast of dozens of people, but at the time a single egg would be served to one or more people, in the latter case as part of a soup or stew of some make. That’s right, since boyhood Gaston has been eating about 50 breakfasts daily. One must question, of course, how he ever got into such a habit if the local economy couldn’t already absorb the supply. Surely those eggs must have been on the market for him to develop such a boisterous appetite, and if so, what’s another dozen? It’s not like anything substantial has changed in the region between his boyhood and adulthood. 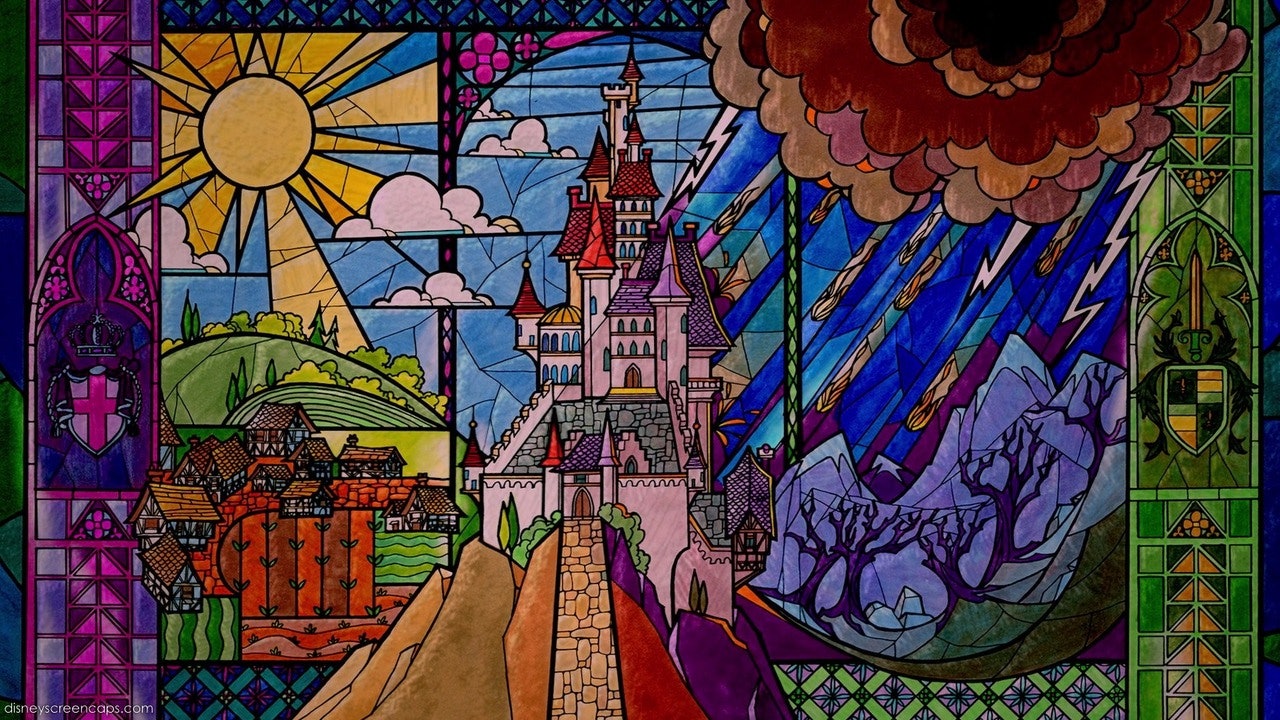 The thing is, eggs are produced by everyone, and a population at least as large as the town’s just up and vanishing would take their chicken husbandry with them. The teapot isn’t hopping about after hens to steal their eggs. As for the larger farmers supplying the area, the curse would have represented a tectonic shift in their supply and demand (animated objects having no need to eat) and so they would likely have abandoned the region for new markets. Packing up and moving out is hard, but when the alternative is having no local market for the fresh produce you supply because a major customer base has effectively fallen off the face of the earth, you make do and take off. How else could Belle and Maurice move into a fully-constructed rural home outside the village? Someone moved away, and that someone took their animals with them.

As for our friend Gaston, of course, his outsize appetites only escalated – and as demonstrated before, he’s got the assets to get what he wants. With the castle no longer looking for bread, meat, cloth, or any of the other services nearby villages can offer, routes in the region have deteriorated to “haunted forest” level and the economy can no longer afford to be selective about dealing with a large obnoxious antlerphile. If he wants eggs, then by God the man’s going to have eggs. As for the rest of you, hope you didn’t need six eggs – anyone who has them is probably planning to sell them to the guy with the gun.

Just how many eggs does Gaston ingest, anyway? Well, a good standard for a high-productivity hen at the time is ballparked to about one egg a day, five days a week, across a year. Less productive hens may only provide 3-4 per week. Let’s average it out to 4 per week per hen; that gives us a per-hen supply of 208 eggs. Now that he’s grown, Gaston boasts, he eats five dozen eggs every morning. Remember, this is merely the man’s breakfast. One can’t fathom what he eats for lunch. 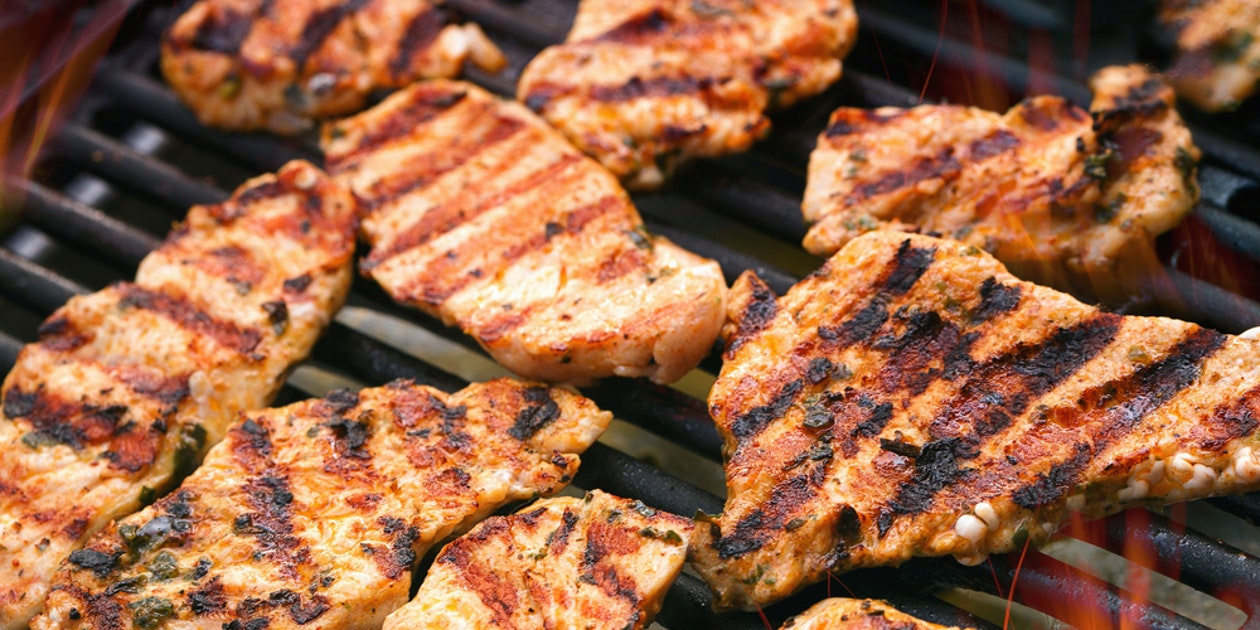 208/60 is 3.47, so any given hen’s yearly supply will cover Gaston for about three and a half days. Of course, a year’s supply of eggs doesn’t come upfront – it was probably 50-60 different hens laying eggs over two days. Let’s be honest and suggest that Gaston wouldn’t leave eggs lying around for more than a day (tomorrow’s breakfast has to be considered) so really we’re looking at 60 hens producing at a time. Since a given hen is only laying an egg on 4 out of every 7 days, we need to be sure to have enough hens available that when some of them cock up (I could not resist that pun) Gaston’s daily breakfast supply is still secure. Per my math guy, I’m told a reliable ballpark for egg supply security is about 130 hens. 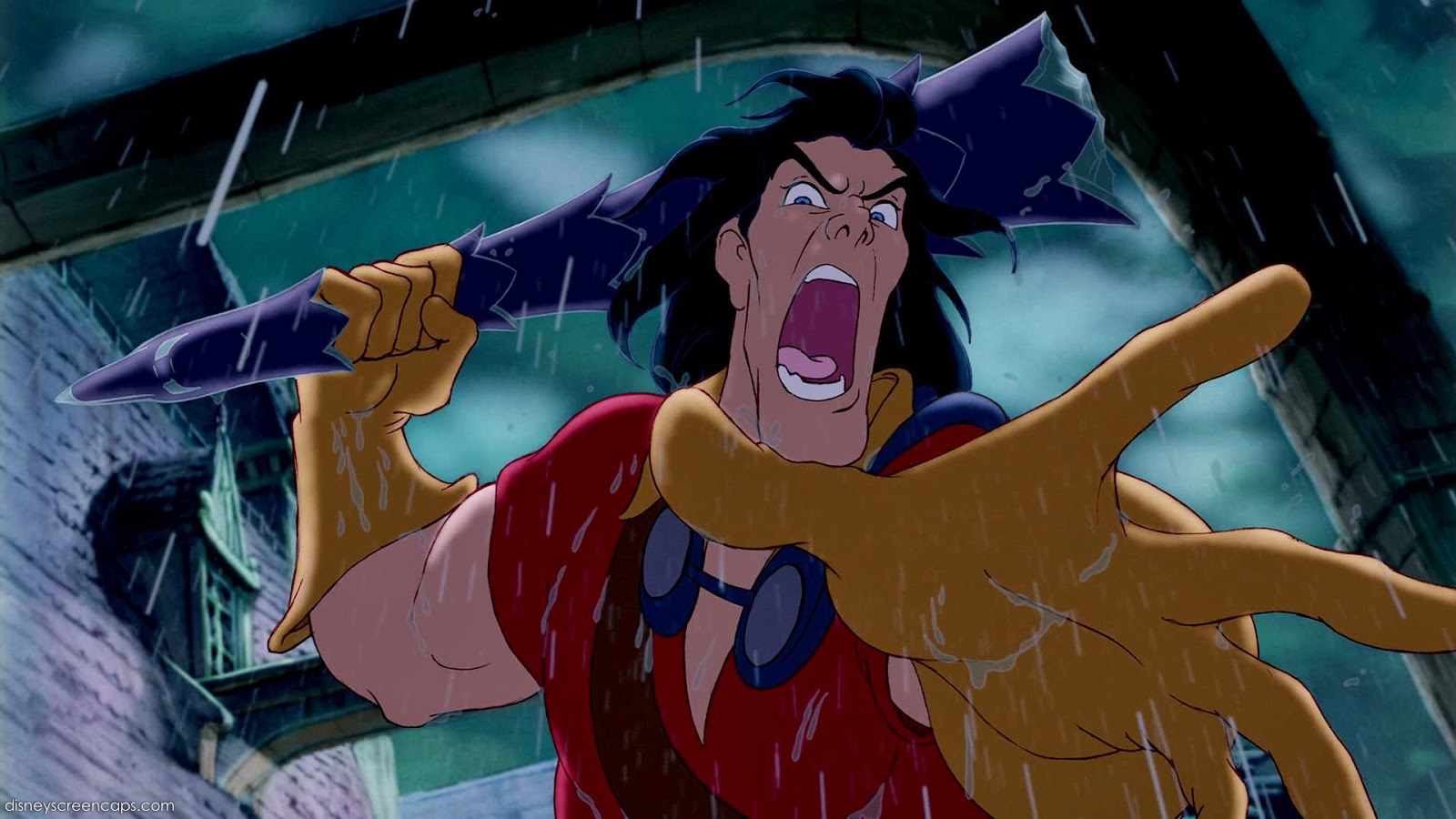 That number doesn’t sound so large, of course, but let’s talk about what that means to a farmer. For the past 100 years, I’m told, the rule of thumb for free range hen density (this is a thing!) is 50 hens per acre. What’s an acre? It’s about 90% of a football field, which is a fair amount of land to own and manage. Those free-range hens will be hiding their nests, so you’ll have to go out searching for eggs like every day is Boring French Easter. Put them in coops and you’ll have to hand-manage them – that’s dealing with their feeding and manure in an enclosed space, and that’s a full-time job. Now let’s add in the usual fun of foxes, wolves, random drunken violent men with guns looking for their midnight egg fix… How about we round that up to 150 hens, and split that up into three acres. That’s three well-managed acres, since you’ll have to have good soil conditions and carefully till areas that pile up with too much manure, which can fertilize grass in the right amount but will utterly destroy the topsoil in excess.

So Gaston’s daily breakfast takes up the resources of three acres of farmland and the people who have to work them. That might have been tolerable in times of plenty; now, it’s probably most of the egg production in the region, and a substantial proportion of the local economy likely leans on this rich gluttonous wastrel’s unbreakable breakfast budget. No wonder he’s everyone’s favorite guy. 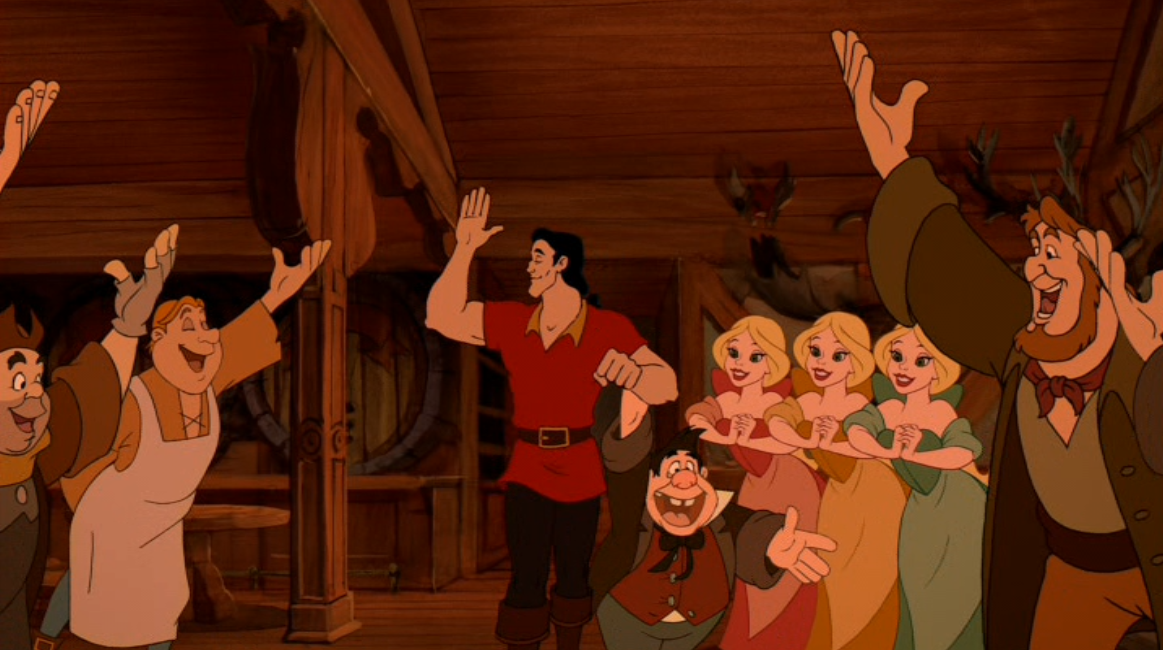 …unless you wanted to eat eggs. This guy leaves a couple of bowls’ worth lying around in his tavern just in case he feels like a casual snack, and his chiefest crony apparently believes he’s safe to waste another couple dozen by throwing them up in the air. This means, by the way, that while Gaston’s morning supply is 60, he probably needs another 24 just lying about in case of eggmergency or eggsplanation of his diet in song. So take what I said above, and crank it up by 40%.

So what’s this about an eggpocalypse? Surely things have reached some kind of eggconomic eggquilibrium by now? What’s the big deal? 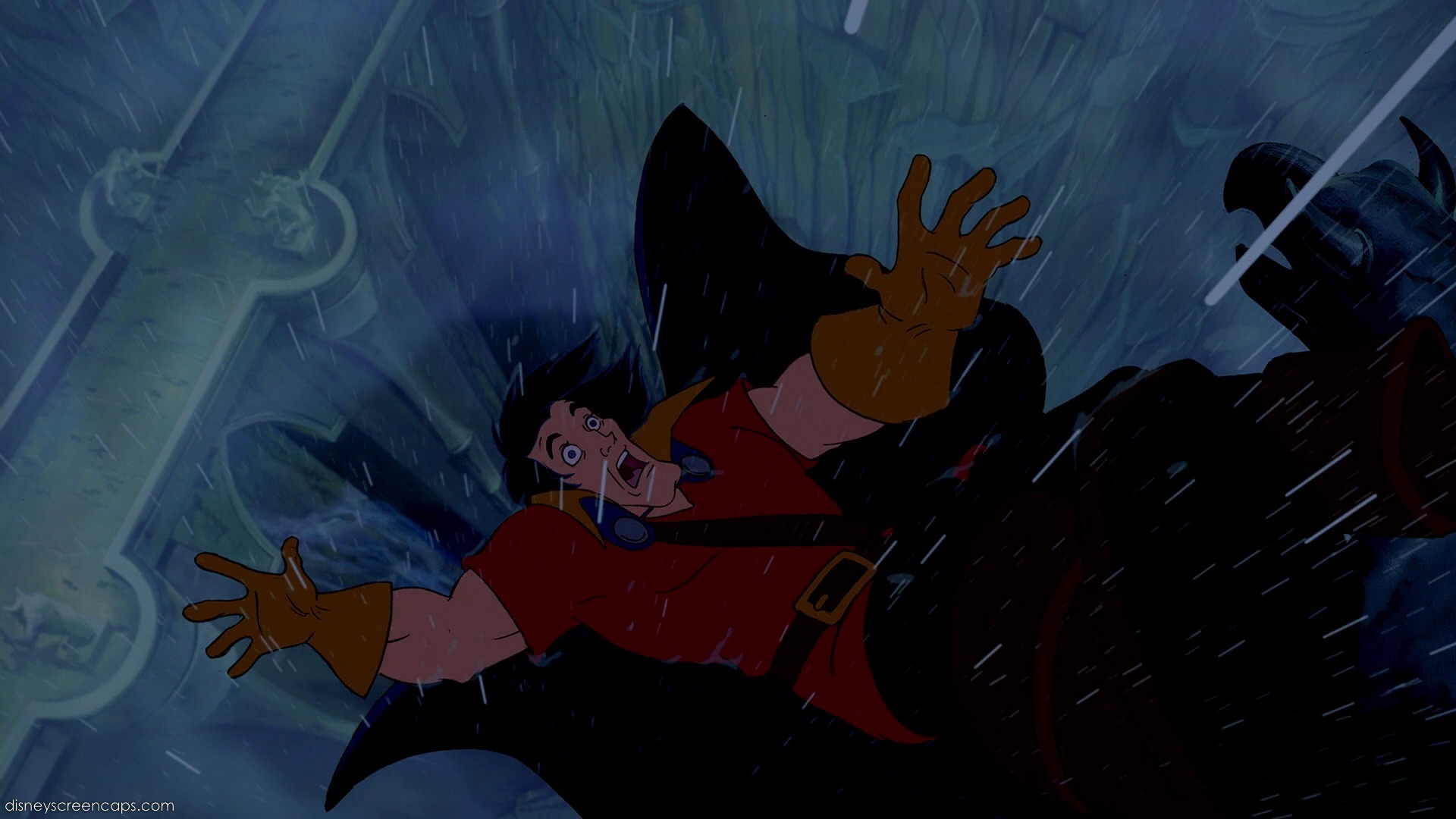 But hey, we’ve got the castle and all of its inhabitants back! I mean, it’s not as though the castle has been receiving an outside supply of food reliably over the past 10 years from other providers (who probably proved their discretion by not spreading tales about the haunted castle). It’s not as though Belle’s opinion of the town she recently moved to might have been colored by the obnoxious misogynistic blackmailer and his lynch mob. It’s certainly not as though the Prince and his town’s worth of servants might take issue with the violent and in some cases sadistic invaders who raided his home with intent to kill him and all his friends.

So all that will definitely work out.

One thought on “Disney’s Eggpocalypse”

What is this I don’t even

Incidentally, an acre was classically defined as the amount of land that one man with one ox could manage with a day’s work. Since Gaston is from wealth, he could easily have an estate with several farmhands that would manage his egg-production needs. This would somewhat mitigate the consequences.