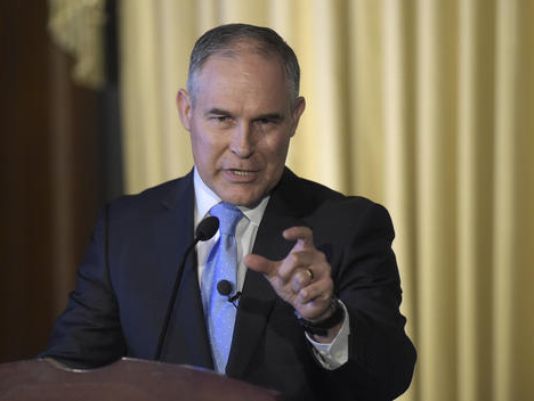 It’s called the EPA, and it used to stand for Environmental Protection Agency. Now that Scott Pruitt is running the show, however, the acronym needs a redefinition: Extreme Pollutant Apologists. That ought to do it.

Turns out I’ve made a similar joke before, the last time Scott Pruitt was involved in making a sad joke out of the agency he heads. Pruitt’s latest difficulty involves trying to keep a lid on climate change science in the year 2017, which is sort of like trying to wrestle a giant squid made of grease. Pruitt has certainly ended up covered in gunk and with a bunch of ink on him. He’s probably still salty, too.

That’s because the Government Accountability Office just released a study estimating the costs of climate change to the federal government. The appraisal puts the bill at $350 billion over the past decade. The result is an official, nonpartisan estimate that puts a real financial cost, a hard and unpleasant number, to an issue Republicans and big polluting industries have spent decades denying – despite having known this information for far longer than the general public.

What to do if you’re Scott Pruitt, industry shill administrating an agency involved in nonpartisan research that tells the ugly truth about things you’d rather keep lying about? Why not declare that scientists who receive grants from the EPA will no longer be permitted to advise the EPA? That’s right, Pruitt feels that there’s a conflict of interest in giving people money to conduct research pertinent to your agency and then making use of that research. Oh don’t worry, he’s still giving out grants – but considering acceptance of a grant means an inability to speak truth to power… well, if I can paraphrase Thomas Dolby: He silenced me with science!

As the New York Times recently reported, Pruitt’s LinkedIn profile still shows that he’s CheckedOut from the role he occupies, listing him as “a leading advocate against the EPA’s activist agenda,” which explains why he abruptly pulled three EPA scientists back from a scheduled appearance at a program to discuss the effects of climate change on the Narragansett Bay. “Climate” is vanishing from the EPA’s website, though “energy” continues to show up.

Wait, does he think he has Rick Perry‘s job? That would make a lot of sense. “Emulating Perry Agency.” Checks out.

Pruitt’s restriction on scientists receiving EPA grants is based on the false equivalency of comparing them to scientists paid by industry groups. Unlike a private company, whose interests are fairly blatant – “We sell X, don’t tell us X is bad” – the EPA is not intended to be partisan or to have a horse in the race. Pruitt might want to argue that the EPA does have a horse in the race – making up threats to the environment to justify more work for itself – but there’s someone heading the EPA right now who has promised he wouldn’t do things like that. His name is Scott Pruitt.

As a result, Pruitt’s EPA listens to industry-backed research while sidelining the research it has paid for as biased, and Pruitt appears to have a quiet mandate to sweep any data about climate change under the rug. How quiet? Soundproof, according to the stats on the $25,000 booth he’s had installed in his office. He’s also now surrounded by a 30-man security detail 24/7, all paid on the taxpayer’s dime.

Perhaps Scott Pruitt fathoms himself as some kind of miniature version of Trump, and has adopted the trappings of a tinpot dictator within his departmental fiefdom. I can’t reasonably evaluate such bizarre activities with any sense of fairness – there have been no significant publicized threats to the person of Scott Pruitt to justify such manpower. I can, however, quite reasonably speak to the activities Pruitt has carried out, and failed to, as administrator of the of the EPA. Pruitt is a corrupt, dishonest, and unworthy steward of the air, land, and waters of the United States of America.

No wonder he got the job.