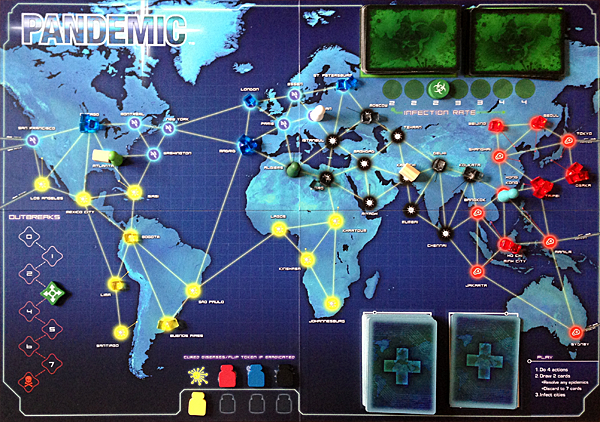 Get out of here, Matt Damon, I’m not talking about your movie.

Alright, there we go. I started this article wondering if there’s really anything more to be said about what is by now a classic board game in its own right, despite having appeared a mere 10 years ago. Pandemic is more of a franchise than a board game at this point – it’s a dice game, a game set in 1840s Spain, a Lovecraft game, two Legacy games, an app, and a random knockoff. Probably the most distinctive brand Z-Man Games owns, Pandemic is effectively the gateway game for the concept of cooperative games. So why talk about it at all?

Why, to spread the infection, of course.

Really, it’s your fault for reading at all.

Pandemic is a game for 2-4 players in which a team of CDC researchers desperately races to develop cures to four rapidly-spreading diseases around the globe, each of which has the potential to become an unstoppable pandemic. With limited time, limited actions, and a situation whose ceaseless and steady progression of Awful is interrupted only by massive spikes of Somehow Even Worse, your team has its work cut out for them.

I think it’s good to reflect on how things have progressed in the past ten years. At the time of its release, Pandemic was extremely novel; now, it’s one voice in the crowd, albeit a distinctive one. If you’re new to the game, I suggest giving it a try – it’s still a cool experience for people who haven’t played it before. If you’re already familiar…

Alright, so, I’m going to pause here and do the positives first, because otherwise it’s going to feel rather unfair to give what is still essentially a good game ten years’ worth of throwing axes to the head. Pandemic is fast for a cooperative game, very engaging, and revels in its theme. You have the spread of infection via colored cubes that won’t stop popping up over and over again, the threat of serious outbreaks that rapidly unleash huge areas of infection and threaten to topple your game plans, and the constantly ticking clock that has ended many a game shortly after the world has finally begun to look stable. With the short amount of time you have been allotted, the simple fact is that you have to make some allowances and take some unhealthy risks in pursuit of the actual goal of the game, which is not to eliminate all infections but rather to develop cures. Spend too many turns mopping up hotspots and keeping things under control, and you may discover too late that you won’t have a chance to put together the final cure before the game ends.

I’ve seen people get into this game to an incredible degree, savoring the tension of watching as the world map goes from slightly messy to unbelievably deadly. The drawing of an Epidemic card, which creates a new critical threat and intensifies prior infections, is invariably associated with despairing moans and a sense of impending doom. Individual roles provide just enough of a tweak to the rules of the game to help people stand out, and inevitably help guide decisionmaking and playstyle for each player merely by what they suggest you can do. The Medic, for example, will almost certainly run into hotspots to clear out the worst pockets of disease, because that’s what the Medic excels at.

Pandemic also boasts a trio of expansions that provide modular content to tailor your experience even further, supplying not only more roles and event cards but also novel challenges. On The Brink introduces the Mutation, a fifth virus with novel behaviors; the Virulent Strain, a super-dangerous disease that becomes more obnoxious with every Epidemic; and the Bio-Terrorist challenge, which pits a player against the team. In The Lab overhauls the entire process of developing cures, turning it into a multi-step research process that involves gathering samples and running field tests. State of Emergency introduces the Hinterlands, rural regions of disease dispersal through animal populations; Emergency Events, which lurk in the player deck to torpedo your efforts with new horrors; and the deadly Superbug challenge, which forces you to contend with a virus that cannot be treated until a cure is found.

So now we have to turn to the ten years of dissection. As one of the foremost cooperative games, Pandemic is inextricably linked to that bane of the genre, turn bullying/alpha player syndrome. To wit: one player can boss other players around, turning collaboration into an extended drag-out game of solitaire in which other people are expected to suffer along. Pandemic has no real solution to this problem, and while I’ve argued in the past that I don’t believe it’s incumbent on a game designer to fix, that doesn’t make it any less of an issue in practical terms. The game’s difficulty is also functionally adjusted not only via Epidemic card inclusion and expansion modules, but also by role selection – my not-at-all mathematical analysis suggests that including the Dispatcher is roughly equivalent to removing an Epidemic card in terms of the effect on difficulty, which is exceptionally swingy. Meanwhile, playing with Operations Expert, Quarantine Specialist, Medic and Contingency Planner (all in the base game) is going to be a much more challenging experience at any level of difficulty.

The game has other issues, too – with difficulty determined by Epidemics and distribution intended to be even, there’s a real possibility that the last Epidemic hides at the bottom of the deck, ready to be irrelevant. Clustered Epidemics tend to have a crippling effect on gameplay as well. The Share Information mechanic continues to be unintuitive – I have played literally dozens of games of Pandemic at this point and in all of them I have had to remind people that they must be in the same city, and it must be the city matching the card. What does this even represent? I’ve skated around some flavor explanations, but they all ring a bit hollow and the game certainly offers me zero backup. Most damning, perhaps, is that while both outbreak loss and disease spread loss feel “fair” in the sense of players being able to see them coming and having had an opportunity to prevent them, there can come a time toward the end of the game where it’s visibly futile to play it out – the deck of player cards is too low to allow for any last-minute saves. This remains incredibly frustrating – there’s no real tension in this discovery; instead, it just sucks all the life from the game. “We haven’t lost, but we will” is dispiriting in the extreme. The design of the game makes this, in most cases, a certainty. I wonder whether it would be possible in a future edition to mask this somehow.

Don’t get me wrong; Pandemic is still a game I truly enjoy, but I’ve known many friends who simply got burnt out on the original iteration. Turn bullying is a pretty terrible thing, and running out of time has left a bad taste in many groups’ mouths in a way that the other two lose conditions do not. I still think it’s a significant game, a milestone of the cooperative genre, a wonderful gateway game, and worth experiencing at least a couple of times. Pandemic is in many ways a victim of its own success, but it’s important to remember that “success” is still part of that verdict.