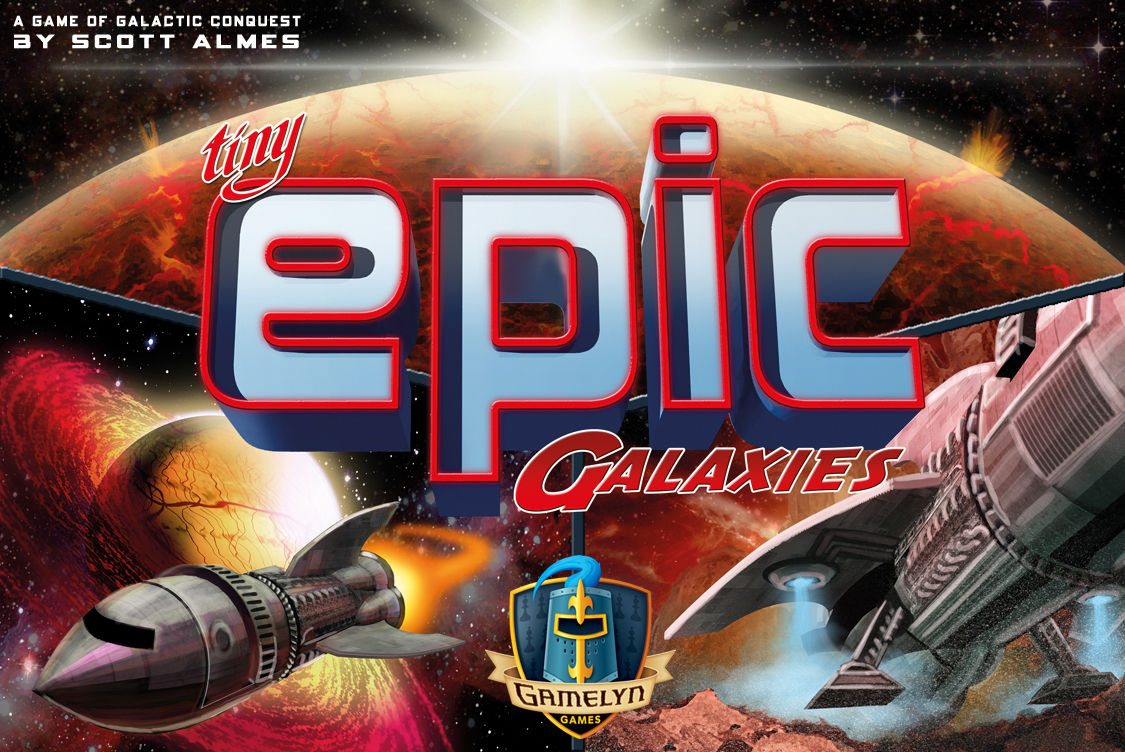 To boldly go where no tiny man has gone before: this is your mission in Tiny Epic Galaxies, part of the Tiny Epic series of travel-friendly games being published by Gamelyn Games. Using your tiny (but mighty!) space fleet, you seek out new planets that promise energy or cultural riches, and make them yours via economics or diplomacy. All of the action is controlled by a handful of dice, which determine which moves are available on your turn and what resources you’ll accrue.

Tiny Epic Galaxies has a lot of things going for it – for a fairly compact game, it’s packed to the brim – cards, wooden pieces, playmats for 2-5 players, a rulebook, dice… even the lid and base of the box have a role to play, one serving as a dice tray and the other an FAQ. The rulebook incorporates a QR code that leads to a how-to-play video, and the game is largely driven by a set of six symbols that have marvelously consistent gameplay meanings.

Such a shame it doesn’t work.

Alright, I’ll back that one up and speak to it more fairly: all the pieces come into play to create a game that functions, this is true; however, Tiny Epic Galaxies has situated itself in the middle of a Venn diagram of game weight that should have no overlap, being both light and heavy without actually occupying the middle ground. The fact that dice rolls govern your turns steers into the lighter side of things and would fit a shorter game, but the number of potential choices on a single player’s turn tip the scales hard. In addition to decisions about what to do with the results you’ve rolled, you have a free reroll, paid additional rerolls, a “converter” to turn unwanted results into a result of your choice, multiple active planets to choose from, sequencing of your actions with the potential to do so in a way that provides further rerolls, multiple decisions about the active planets, the option to upgrade your empire, and multiple colonized planets whose special actions become available.

The above is what shows up every turn, and for a player who can parse it all rapidly and with purpose, it can all result in a well-oiled “this is what I did, I can walk you through how, if you would like.” However, with the likelihood of the board changing between turns, it’s difficult to reasonably plan out your own turn ahead of time. Furthermore, even the best-laid plans are ultimately reliant to some degree on the willingness of the dice to cooperate.

It’s certainly possible for this strange tension between heavy and light strategy to work, but in the case of Tiny Epic Galaxies, the rewards are insufficient for the investment. The components are pleasant enough for what they are, but you represent a colored spiral galaxy, not an alien race of conquerors; conflict between players is at best about races for planetary control and nudging people backward on the track (which, thematically, means outmaneuvering them diplomatically or economically), and the planets you vie for control over are ultimately just colored spheres bobbing around in a starry void.

The problems are only made more apparent at higher player counts; while Tiny Epic claims to support 2-5 players (with a solo option), 5 proved utterly torturous, a 90-minute slog in which two players could reasonably contest the victory and nobody’s “secret score” objectives were in any way relevant. Perhaps this experience was atypical, but based purely on the length of individual turns and how powerless some players felt watching others across the table doing their thing, I can’t imagine that even a four-player experience would be tolerable.

There’s so much in this box to like, but a slogging and randomly sandbagged game of “rich get richer” can’t run for 60-90 minutes and remain honestly engaging. I hope at some point to try it with 3 players and return saying it played much better, but to be perfectly frank if I’ve got a three-player group, I have many superior options to bring to the table. Tiny Epic Galaxies fails to make the grade.