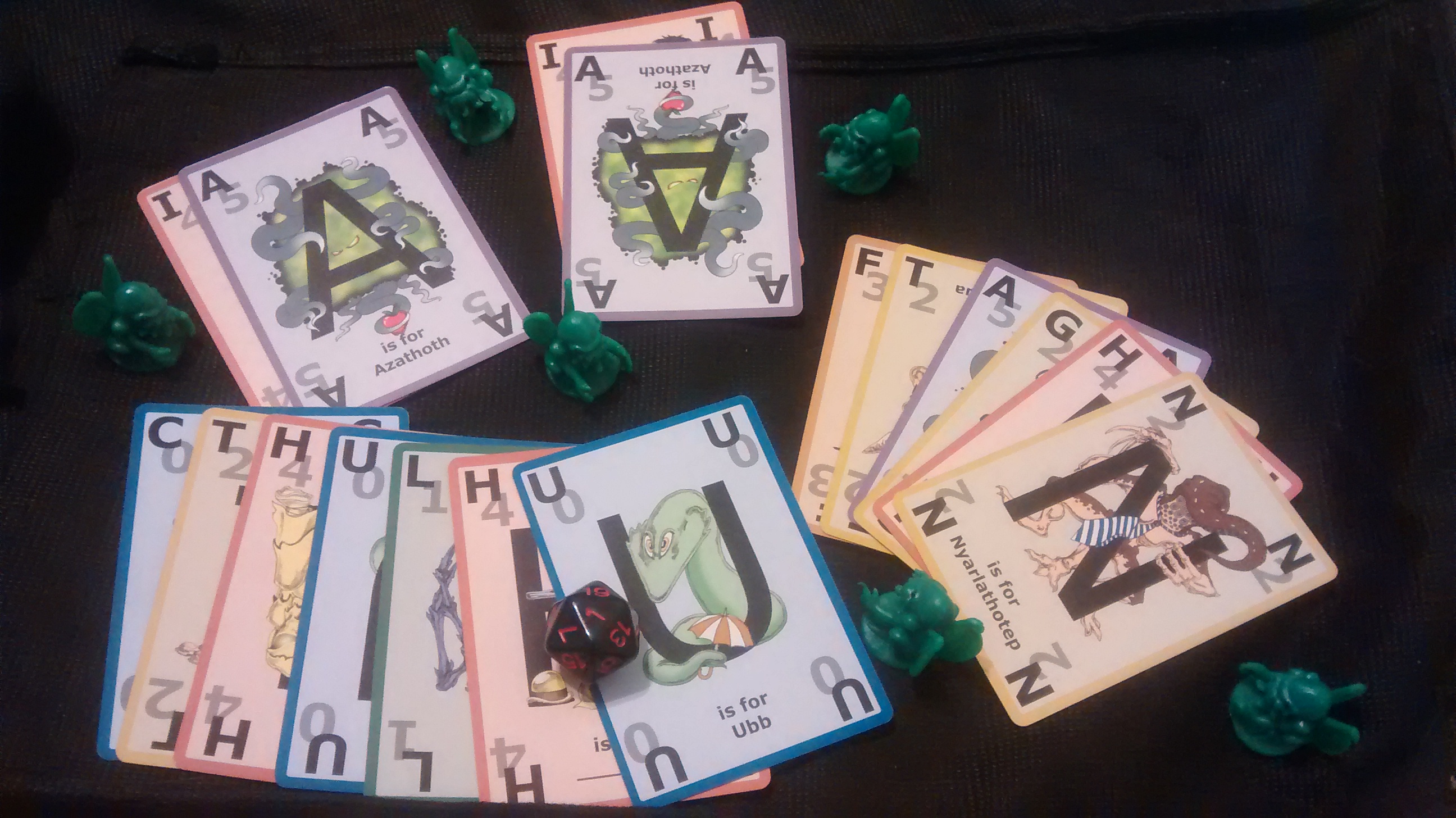 “Do you like Scrabble?”
“No.”
“How about the works of H.P. Lovecraft?”
“Who’s that?”
“Alright then, would you like to play Unspeakable Words?”
“Definitely!”

The above is the unorthodox conversation I’ve found myself having numerous times when bringing out Unspeakable Words, a Lovecraft-themed game of word scoring in a Scrabble-esque vein. Besides draping itself in the eerie, squamous, ichor-drooling trappings of Lovecraft’s famous creations (and a number of less famous ones, hello Uub), Unspeakable Words presents a number of improvements to the formula that made Scrabble famous.

For starters, the comparison to the older game, while inescapable, is also in many ways unfair – this game is played with cards, not tiles and a board. If you can make a word with the letters in your hand, you do so, and that’s your turn – no figuring out where to place it on the board, or how to accrue score multipliers and lock others out of plays down the line. Unspeakable Words also reverses the traditional mode of Scrabble scoring, in which rare letters of uncommon use are the most valuable. Here, your best friends are the vowels A and E, at least when looking for points, while O and U have no value at all.

What gives? Well, this is all part and parcel of Unspeakable Words’ main gimmick: adding in an element of risk and reward. Each player has a set of five Cthulhu statuettes representing their sanity (why seeing more of Cthulhu in front of you results in increased sanity is beyond me, but regardless). After playing a word, you roll a 20-sided die. If your result is less than the score of your word, you lose sanity. A player whose last bit of sanity is lost immediately loses the game. As a result, the game can be won either by reaching 100 points or by being the last person alive who hasn’t been reduced to a gibbering madman.

It’s this risk-reward element that adds some much needed levity and momentum to the dusty old Scrabble formula. 15-point word? Good job, but you’ve got a 70% chance of failure now. 4-pointer? Probably safe, but can you imagine losing sanity for such a low return? It doesn’t help at all that Unspeakable Words values letters not by rarity in the English language (no 10-point Q for you) but rather by number of internal angles. “Eat” is worth 11 points, while “soul” is worth a measly one. With the most common vowels working for your score and not your stability of mind, you’ll find that playing in the deep end is more common than not.

Rounding out the game are a few special cards that crop up just often enough to mix things up a little – the Hounds of Tindalos, the Elder Sign, the Yellow Sign, and the Unspeakable Letter. Players reduced to their last shred of sanity are also endowed with a special privilege: they can use any combination of letters they like to make a “word,” provided they offer up a definition for it. The rules also call for writing down each player’s submitted words so that none can be reused during a single playthrough, which creates a marvelous added hurdle when common words get burned through and more creative (and riskier) words are required.

All in all, there’s a surprising amount of play value in this box, and it’s a light, quick, and accessible game even for those unfamiliar with Lovecraftian themes, which are basically just an aesthetic on top of a crafty and silly word game. I can’t promise people will lose their minds over this one – it may seem to be in the cards, but it’s all just a roll of the dice.