In the Glam Lightness of the ’90s there Is only Warhammer 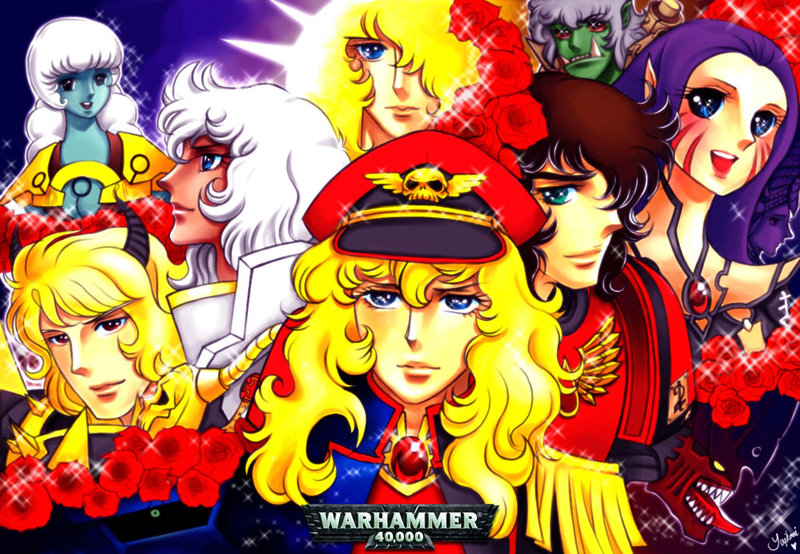 I discovered in a discussion earlier today that there were talks, in the 90s, of adapting Warhammer 40K as a CGI cartoon. Naturally, this got the old wheels spinning in the worst of ways, and now here we are.

It was alluded to that female Space Marines was the sticking point for Games Workshop, and given how utterly trivial it would be to bend a bit on what’s basically stubbornness born from sexism, I feel it perfectly fair to throw that jibe their way. Not to mention, of course, that it was the 90s; executive meddling would not have stopped there.

Let’s look into a possible board meeting:

“So we love this property you have here. It’s very hip, very rad, very now. All this power armor, spikes on things -”
“Your little green aliens -”
“Yeah we love the little green aliens! And the Terminator guys, and the big giant bugs -”
“It’s all very James Cameron, very money -”
“Verrry money.”
“We have a few suggestions, though.”

“Well first off, you’ve got these space soldiers -”

“It’s the 90s, we’re all progressive here, right? Woman can be soldiers too.”

“Sisters of Battle, sure…”

“Call them what you want, it’s good, we just think there should be, you know, one or two female characters. In the mix.”

“From the Sisters of Battle?”

“Well we can say they were and then they transferred, or whatever, we’re going to have them.”

“Cool, so this first one, we’re thinking she’s in like a purple, maybe a fuchsia or pink power suit -”
“Or maybe she’s got like a see-through cockpit”
“- or that, yeah, so you can see she’s a woman.”

“He’s speechless, see, he loves it! And she’ll play the part of the love interest for the main guy, and also his rival, create kind of a love triangle element.”

“Then just to balance her out we’ll have another one, she’s not as attractive, maybe glasses or brown hair instead of blonde, and we can keep her on the books for down the line, in case we need a second love interest. Right now, though, she’ll be like the contrast character. Maybe an episode here and there about how she’s got some flirty tension with another character, one where she’s jealous of the main girl, stuff like that. We’ll put her in like, a bright yellow suit, maybe orange, something that’s different but doesn’t encroach on the main girl.”

“Well, see, we’d like to change that. First off, right now all these guys wear blue. That’s a boy color. We can’t have the girls dressed the same, it will confuse the kids.”
“Market research says so.”
“Yeah, they also say that kids like being able to pick from different colors. Patterns.”
“Power Rangers, it was huge.”
“Huge!”
“So we’re gonna keep the lead guy in blue, we figured like a tiger-stripes pattern on his rival, we’ll get this one in green.”
“Oh that reminds me, one character is going to be handicapped -”
“Disabled, you mean -”
“No no, it’s physically challenged”
“Whatever, he’s a cripple, his legs don’t work, you know what I mean. Anyway, he never gets out of his suit cause he needs it to live or whatever.”

“So that sets up some narrative possibilities there, gives him some elbow room. We’ve also been asked about making one of them Native American.”

“I mean mostly it’s just going to be black hair, red skin, he’ll talk about spirits and totems and crap. Paint like a bison decal on his suit.”
“Can we call him Bison?”
“I think that got trademarked.”
“Damn. Something like Hawk then.”
“Definitely. I feel it. It jives. Hawk the super soldier, fights for the spirit of his people.”

“You can clone a lot of guys. How do you think we got the black guy in there?”
“Market research says keep it to one black guy. Need to make room for the Native American.”
“Could we make a girl Asian?”
“Not right now we can’t, Power Rangers, remember? But we’re thinking maybe if this thing gets rolling, we’ll bring out like a sexy dragon lady type who defects from the bad guys.”

“DEFECTS FROM THE BAD GUYS?”

“Well yeah, they’re -” *riffles papers* “Chaos, they’re unpredictable, right? So you have this defector who learns that her side is wrong and she comes over and there’s gonna be great tension with the leads.”
“Wait, did someone do that already?”
“Not yet.”
“Sweet.”

“I don’t even know how many ways I can address how wrong this all is.”

“It’s not wrong, my friend, it’s just an adaptation. Now let’s talk about our main dude, as it were.”
“Market research suggests Christian households won’t like ‘Ciaphas’ as a name,”
“Can’t tread on that Bible stuff.”

“Your market research suggests you’re selling any of this to Christian households?”

“Well yeah, it’s America. You pitch ’em good vs. evil, love redeems, manly guys fighting the good fight, it’ll go over.”
“But this name business -”
“- right, sorry, got off topic, we’re thinking we’ll call him something with more of a now edge, short, to the point. Something with jawline.”
“Need a name with jawline.”
“Kyle. Right? It’s the same thing, but it’s more relatable.”
“We’ve also got samples saying that either ‘Ky’ or ‘Guy’ could work. Not big on ‘Guy’ for him though, we’re liking Kyle.”

“I know, right? It’s so great. Cain, well, like I said, Biblical crap. No touchee. This here is gold.”
“Strong R sound.”
“Sounds like ‘handsome,’ you get that natural ring -”
“- and it’s a crime word, it’s got some edge to it.”
“You can hear it now, all across playgrounds. This is our hero, totally.”

“Alright, well, if we have to do this distinctive colors thing and we’re not using an Imperial Guardsman or any Ultramarines, maybe they can be Deathwatch.”

“Well yeah, they’re like what comes above the Super Marines. They’re Ultra.”

“It’s a mindspace! It’s so great – Kyle Ransom and his Ultra Marines.”

“- and made it better, yeah! Honestly, I don’t know where your marketing team was, you should be glad we stepped in to help!”
“Just think of it – you’ll be able to sell your little metal guys in these five-man squads – ”
“Five-person -”
“Yeah, sorry, two girls. Oh that reminds me, if we add a character later to the team, are there any aliens you’d like us to work with in particular?”

“…they don’t work with aliens.”

“Well no, I mean they fight all these ones, sure, but you had like…” *flips pages* “Elder aliens, says here, and we were told you wanted to incorporate the, er, Tao?”

“Well, we suggested that as an eventual goal. We haven’t launched that product line yet.”

“Fine, fine, but anyway these are both very relatable and different, we’d like to get one on the team eventually.”
“Kyle can get some of that Captain Kirk going on, if you know what I mean.”
“Haha, yeah, everyone loves that.”

“You want your lead character to flirt with Eldar and Tau.”

“Of course! You need to have the sense that he’s not tied down entirely, that’s what makes the love triangle matter.”
“Now there’s one other thing…”
“Oh right! We’d like to tweak a name here…”

“Funny you should mention God, it’s your -” *papers ruffle* “- Chaos God ‘Khorne’. Now this sounds like Corn, and we’re worried -”
“Well, corporate is worried -”
“- sure, but anyway, they won’t like that in Iowa.”
“Won’t play in the Midwest.”
“Lot of corn farmers there.”

“Nope, that’s corn country. And anyway, you know, ooooh the scary badguy Corn, I don’t hear it.”
“Doesn’t fly.”
“Does. Not. Fly. So we’re looking at changing how it’s said.”

“This is a children’s show.”

“Wasn’t that a Star Trek villain?”

“Sure, but they don’t have a monopoly on it.”
“We checked!”
“So we’re just gonna drop the other three and go with Khaan the Chaos Lord.”

“Alright we’ll call it a discussion for later. So what do you think?

“I think female Space Marines is one step too far. Good day, sirs.”

“…you know, I didn’t think that would be the sticking point. Those Brits must be way more sexist than we thought.”
“Well, you know, we’re just more open-minded.”
“Good on us!”

“WARHAMMER! In SPACE!”
“In the future year of forty thousand, the Space Emperor protects humanity!”

“His best soldiers, the Space Marines -”

“travel the galaxy to serve and protect mankind!”

“But when the evil Abaddon -”

“and his Orcs, Tyranids and Necron Warriors attack the planet Earth, the Emperor must call for…”

*cut to the protagonists*

“The Ultra Marines! Captain Kyle Ransom and his mighty laser sword of justice! Stella Gold, the beautiful star warrior and her laser whip! From the planet of the Cat Clan Rangers, John ‘the Tiger’ Lawson, the master of the laser cannon! Rough and tough Manny Rock and his power fist! And Kate, the technical princess, with her amazing gravity gun!”

“Together, they will fight to bring order to the forces of Khaan the Chaos Lord and save the universe by rescuing Horus, their missing leader!”

“They are… the WAR HAMMER!”