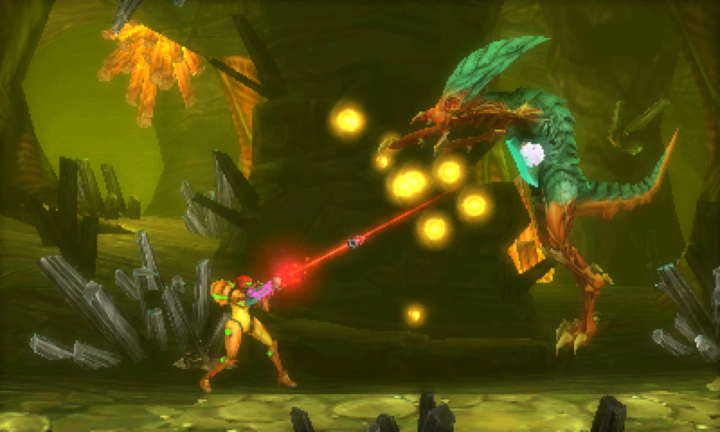 I was introduced to the Metroid series by my older cousin, who showed me Super Metroid and got me to try it. Not long after, we discovered that a younger cousin also had a Metroid game, this one for the Game Boy, and he wanted our help and “expertise” to get him through the next part of the game. Naturally, we were sure that the skills learned in one game would instantly transition to the other.

Can’t say I haven’t made that mistake a few times.

Metroid 2: Return of Samus was an altogether different game – where were you supposed to go if there was no map to guide you? Have you been in this room before? What is the goal supposed to be? Lacking a game manual, and getting clarity from a seven-year old, we were more than a little bit lost as to what was going on – but hey, Spider Ball! Look over here, I found some missiles – or just a missile refill station, drat. I knew the rough goal was to find stuff and shoot things, but even something as simple as the Metroid counter had a significance that eluded me.

Eventually, of course, I played the game with more perspective (read: the Internet) available to assist me. No longer would I think that a discarded Metroid skin was some sort of leering frog creature ready to pounce at me. Instead, I learned the nuances of the black sheep of the Metroid franchise, and came to appreciate the new monsters and the old-school gameplay. With the Metroid franchise feeling perpetually starved for love from its owner, it seemed as though this entry was doomed to be a curiosity of video game history, a source of lore for Metroid Fusion and nothing more.

Now we have Metroid: Samus Returns, an updated remake for the Nintendo 3DS (as well as a fan remake, which I’ll talk about in another post). M:SR garnered massive fan reaction when it was announced at Nintendo’s E3 show, and deservedly so – old-school Metroid gameplay given a modern treatment with the Prime series aesthetic in play? Sign me up, said Metroid fans. Nintendo showed off far more than just a trailer, demonstrating gameplay, various abilities, and even combat against Metroids – cinematic brawls where a new Melee ability would be key to ensuring survival and ultimate victory. It was exciting, it was hype…

I make no secret of the fact that I think the Super Nintendo is still the greatest console – the games roster, the boundary-pushing, the creativity deployed despite the machine’s limitations, all of it resulted in games that still engage and entertain over two decades later. I like sprites, I like 2D environments… what can I say, I’m a bit of a gaming Luddite. That said, I enjoyed Metroid Prime 3 on the Wii, I’ve played and appreciated numerous 3D titles, and I had a lot of fun with the Mario titles on the DS and 3DS. Can I give this one a fair shake? Let’s find out.

Metroid: Samus Returns is an update of Metroid 2: Return of Samus which sees the ace bounty hunter dispatched to the planet SR-388 to exterminate the Metroid species. Around 40 specimens have been detected in the caverns beneath the surface, and Samus is called on to explore the twisting passages and secure suit powerups from the Chozo ruins beneath in order to locate and eliminate each Metroid and ensure the galaxy will no longer be at risk from the species. She soon discovers that on their homeworld, Metroids have a curious life cycle, growing and moulting their original jellyfish form to develop into insectile-reptilian creatures with sturdy armor and aggressive cunning.

Samus controls extremely well, and everything devoted to motion is fluid and intuitive. Most of the standard slew of upgrades are present, and it’s always welcome to see the classics make their presence known. Missiles, as always, are the limited-ammunition one-size-fits-all offensive solution for most problems, while the beam and its upgrades answer the question of what to do when your supply of kinetic ordnance is low. Samus’s progress into the depths is hindered both by puzzling obstacles requiring new tools to bypass as well as by large, ornate Chozo gates that await the extermination of all the Metroids in the current area before they will permit passage to the next.

New to this game is “Aeion,” a mysterious type of energy used by the Chozo and linked to four different upgrades that each drain Aeion reserves to use (replenished via enemy drops). “Aeion” contains every vowel except U for Unnecessary, which Unfortunately it happens to be – three of the abilities don’t particularly justify their inclusion, while the fourth is arguably a different upgrade from the past given a new theme. The first Aeion ability in particular irks me: the Scan Pulse, which reveals the local map and hidden chambers and exposes destructible blocks in the area. Yes, this takes energy, but not so much that you can’t use it to effectively sweep the game for hidden passage locations. For my money, the Scan Pulse sucks the exploration right out of the game, and there’s not an immense amount of that to begin with.

Yes, M:SR is a rather linear game, its upgrades inescapable and presented in the order required. Don’t expect much sequence-breaking here. In fairness, the original was also relatively linear, but at least it tried to get you lost and wandering. Aesthetically, M:SR is a beautiful game, with brilliant backdrops and serviceable main environments. It does, however, lack much in the way of “organic feel” – everything is flat and neat and stalagmite-free, which is odd in an extensive cave system. Chozo devices to restock ammo and save progress feel somewhat like alien litter, and in general the Chozo presence on the planet feels like a bit of an afterthought until the very late stages. The music brings back classic tunes from Super Metroid alongside ambient work that sets the tone, but I do need to call out the Lower Norfair track, which appears in every single lava room and is sometimes such a jarring transition that I ended up thinking “Oh there goes that lava again, singing its favorite song.”

The problem I have with what I call “2D3D” (three-dimensional objects viewed on a two-dimensional plane) is that it’s associated with a certain style of gameplay, one that I find has leaned toward hand-holding over rewarding experimentation, exploration, and just plain practice. I bemoan quicktime events replacing skill and alertness, not least when they get extremely repetitive or are mandatory for success (Kingdom Hearts 2? Kingdom Hearts 2.)

Metroid: Samus Returns showed off what felt a lot like quicktime events with the new Melee attack, in which Samus punches upward with her arm cannon to knock an enemy back and expose its weak point. This is a mechanic that feels overused to the point of interfering with exploration – too many basic enemies demand a punch to the face before they’ll allow you to fry them with beams, and a missile is just as valid a solution for concussive destruction. It’s the kind of thing that’s cool as an additional option, but when pushed this hard it just slows down encounters with enemies by making them two-stage without actually increasing individual depth or threat.

There’s a lot of enemy clutter in this game – things that don’t meaningfully threaten to injure you, but are there to destroy. It does at times detract from the feeling of isolation and anticipation – it’s just gameplay noise, in a way. As for the Metroids themselves, early battles use diverse arenas to allow them to get the drop on you, and the second form in particular presents a fun challenge. Every time I encountered a Gamma Metroid, I had fun – some of them will even respond to a missile salvo with “I don’t need this in my life” and book it out of there, forcing you to search deeper into their nests to root them out.

Unfortunately, the Alpha and Zeta Metroids both confirmed my fears about quicktime events. Alphas can be killed by missile spam after a single Melee attack before they recover, making their battles only as long as it takes them to charge you. As for Zeta Metroids, these lean and dangerous beasts are the closest we’ll get to Samus Aran fighting the Xenomorph from the Alien franchise – it’s incredibly satisfying to see one creep out of a nest to attack. However, each of them fights in the same style of arena, fights in the same way, and is taken down in about 60 seconds with little to no variation. The Melee cinematic we saw at the E3 presentation is a major component of making Zeta fights feel samey, and I would have liked more attention paid to making each of these encounters more interesting. Similarly, what follows from there leans less on the cinematic quicktime Melee attack opportunity, but nonetheless is too repetitive.

For better or for worse, M:SR follows the Prime series aesthetic, graphically and musically. The results are, I suppose, dependent on how you felt about those games. The layout of the planet and its various areas didn’t resonate much with me, chiefly due to some lacking distinctiveness among the many many caves. Certain backgrounds stand out, to be sure, and a late-game mechanical area is extremely detailed (albeit an odd choice, to my mind, as the place for the most dangerous Metroids to be lurking).

So as to not mince words: this game has no interest in asking you to explore as a component of its main gameplay. As far as Metroid: Samus Returns is concerned, you deserve to be routed toward all mandatory upgrades and all Metroid battles in a streamlined fashion – exploration is for completionists and those who want more ammo. That doesn’t need to be a bad thing – it comes down to a question of taste. My feeling is that there’s solid gameplay here, with a devotion to making the Metroid hunt feel fair, accessible, and decently cinematic. Does that hit my Metroid taste buds? No, it doesn’t, but I don’t know that I was the target audience here. I appreciate that it exists, I’m glad others will get to experience this part of the Metroid canon in some fashion, and I think it’s a well-made game that does some things really well. This franchise has just set itself some rather high bars to clear.