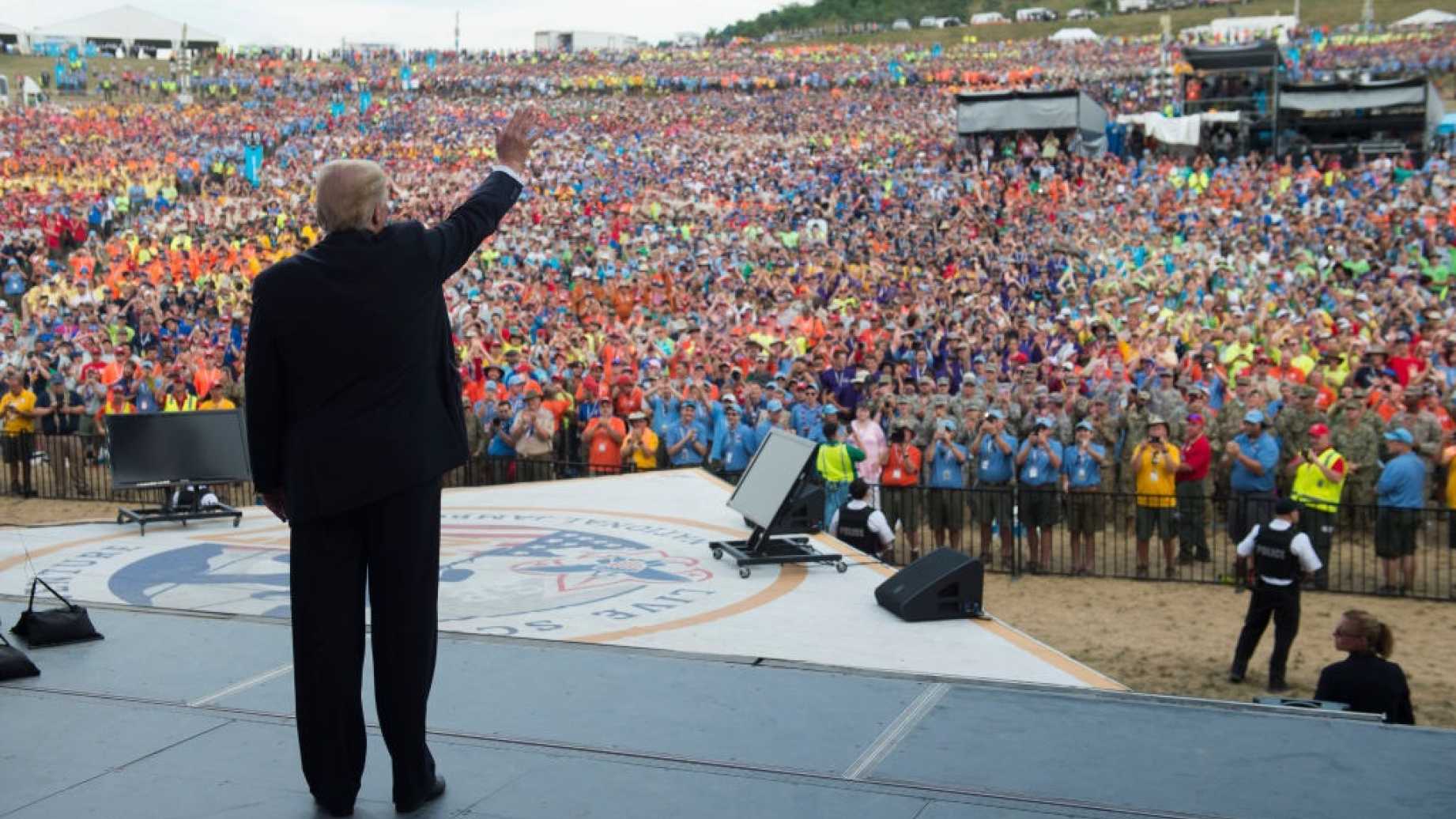 A few days ago, I stumbled across alarming headlines announcing that Trump had ordered military personnel to support his political agenda. Reading the actual content, of course, I found the truth behind the overblown headline – just Trump speaking to a group of sailors aboard the USS Gerald Ford. Yes, he brought political advocacy into a speech to serving military personnel, but this is what was said:

“I don’t mind getting a little hand, so call that congressman and call that senator and make sure you get it,” said Trump, who continued: “And by the way, you can also call those senators to make sure you get health care.” These are ill-advised statements, to be sure; the military is not supposed to take positions on domestic matters, and Trump has an unfortunate habit of forgetting this basic truth. Nevertheless, they are a far cry from the brush with open fascism and despotism suggested by panicked media headlines.

I had been preparing to write a longer article in service to this point, an attempt to walk back some of the hyperbole surrounding this isolated incident. Of course, that’s when Trump had to go and do something much, much worse:

He did the same thing to the Boy Scouts of America.

To a crowd almost exclusively composed of non-voters, children 11-18, forty thousand strong, Trump opened with a suggestion that nobody should talk politics in front of the Boy Scouts. Of course, in Trump’s world, he ain’t nobody – he’s somebody. Before long, he was talking about his current political target (that’s health care), threatening to fire a cabinet official, throwing shade at “fake news” and patting himself on the back for having such a large audience to speak to.

“Today, I said we ought to change it from the word ‘swamp’ to the word ‘cesspool’ or, perhaps, to the word ‘sewer.’” This is an actual quote from his speech. He also wanted to emphasize loyalty, and the importance of loyalty, which is of course a Boy Scout value but takes on a vastly different tone coming from the man who even at that time was currently busy driving a bus very publicly over his most loyal supporter, the man behind “honest loyalty.” “We could use some more loyalty” is an ugly and chilling thing to hear from the nation’s chief executive, who has been talking about his own cabinet, six months into his term. The nature of the audience makes it worse.

He advised his audience that the economy is great, that Election Day 2016 was a “beautiful date,” and reminisced about a map that was “so red” with a reminder that red means Republican. 260 days after his election, Trump felt the need to pat himself on the back for it in front of an audience of 40,000 children and young adults. As if that weren’t enough: “And you know we have a tremendous disadvantage in the Electoral College — popular vote is much easier.” So maybe I didn’t win the popular vote, he says, sour grape reeking from every word. You non-voters know that we did something so much harder, so much more worth boasting about. To you.

Oh, and if you hoped he was done, you forget that this is Trump. Now he’s in the zone, and now he begins going state by state – how he traveled to Maine four times for “just one vote” because he heard they were at 269; how Wisconsin came in, Michigan came in, and of course let us never forget his huge crowds. Trump decided he needed to make a commitment to the young men gathered here, and boy oh boy, did he ever have the perfect one ready:

One wonders if he has anything to say to the attendees who don’t celebrate Christmas. Then one remembers what Trump usually says regarding minority groups of any kind, and one hopes that he in fact has nothing further to say to those youngsters.

“By the way, just a question, did President Obama ever come to a Jamboree?” Here Trump congratulates himself for being “better” than Obama, who never did attend a Jamboree – in person. He did give a speech to them in 2010 that was presented on-screen. Several other Presidents have also attended and made live or pre-recorded addresses over the past 80 years. Franklin D. Roosevelt spoke of unselfishness and good citizenship; Truman talked about speaking with others, exchanging ideas, and learning about other people; Eisenhower spoke to “common purpose and common ideals,” and George H.W. Bush spoke on service to others.

You had Lyndon Johnson on the importance of history and the idea that founded America; Nancy Reagan, perhaps the most political until now, with a speech about the dangers of drug use and the positivity of the Scouting organization for youth; Clinton on bravery, good deeds, and giving back to the community. Now, you have Trump, who had the opportunity to deliver a positive message centered on the young men who had congregated to celebrate their efforts, their skills development, their friendships, and their character-building. Instead, he opted to make it all about Trump, and use a rambling, “winning” version of his stump speech to whip up a chant of “Trump, Trump, Trump!”

Oh yes, there was chanting: “USA, USA” and “Trump, Trump, Trump” were favorites. With many children in that audience coming from households that supported Trump, it’s not surprising – and between their peers and the man on stage, vested with authority by both the electoral process and (on a more immediate level) by the Boy Scouts of America having given him a stage to speak from, literally elevating him, it’s quite understandable that even those who were uncomfortable with him may have joined in simply to fit in.

I won’t be the first of Trump’s critics to say it evoked shades of the Hitler Youth, nor likely the last, but we’ve now reached the point where Trump’s addiction to the notions of his own personal adulation, one-way loyalty to him and him alone, and absolute direct control over the institutions and organs of the US government, all sum to an inescapable specter of fascism. In his heart, Trump yearns to be a despot, because even taking over the White House hasn’t given him what he most desires. Trump preaches his narcissistic message to children and to America’s armed forces, groups who should not be on the receiving end of politicized speeches. It’s been suggested that he’s merely too ignorant to understand that these speeches are improper, but let us be clear: whether he knows or not, Trump certainly does not care.

The product of things like this, of course, is unfortunate for the Boy Scouts of America, as well as other organizations which have historically enjoyed a friendly or traditional relationship with the White House and its current occupant. The BSA was quick to stress that their invitation to Trump to speak was not intended to be partisan, that they extend such an invitation to every sitting President. However, the simple fact is that between his innate divisiveness and his tendency to go off-script and start in on his favorite cavalcade of stump speech featurettes, extending an invitation to Trump to speak is a political act. Inextricably tied to that fact, and bringing the damned-if-you-don’t to the table, is that Trump will respond to any perceived slight with all the rage at his disposal, amplified through the megaphone that is his base, and translated into a message the right-wing media will echo down through the ranks. Therefore, failing to invite Trump is also a political act.

Thanks to the thin skin and massive ego of Donald Trump, politically neutral organizations advocating for good causes are put in the ugly position of either having to reach out to the White House and clean up whatever mess he leaves behind, or else bracing for the impact of whatever a petulant man-child with far too many resources on hand will throw at them. Even Disney faced this issue, when looking at the Hall of Presidents attraction (where they had no doubt been working on an animatronic Hillary Clinton, ready to deliver a bright speech about breaking the glass ceiling) and publicly considering rearranging the show so that Trump wouldn’t speak, changing a tradition that began with Bill Clinton. Regardless of whether he speaks or not, the presence of a Trump robot at the heart of Disney’s parks will be a source of distress to some and ugly self-satisfaction to others, neither of which is the sort of thing Disney is looking to convey to their guests.

This is Trump the Great Divider, an unpresidential man of small and petty nature who brings everything he touches down to his level. Lacking the self-control to speak as befits a man in his position, he should not be extended further opportunities to do so. The nation’s military does not deserve to be pulled into domestic policy disputes by their commander-in-chief. The nation’s children do not deserve to be turned into an autocrat’s self-aggrandizing setpiece. Trump does not deserve to keep receiving new opportunities to further divide Americans in the forums most dedicated to unity and common ideals.

They are not the values of Donald J. Trump.

One thought on “Politics, Trump’s Everything”

Excellent article. I do hope it gives other organizations cause to pause before inviting him to speak.