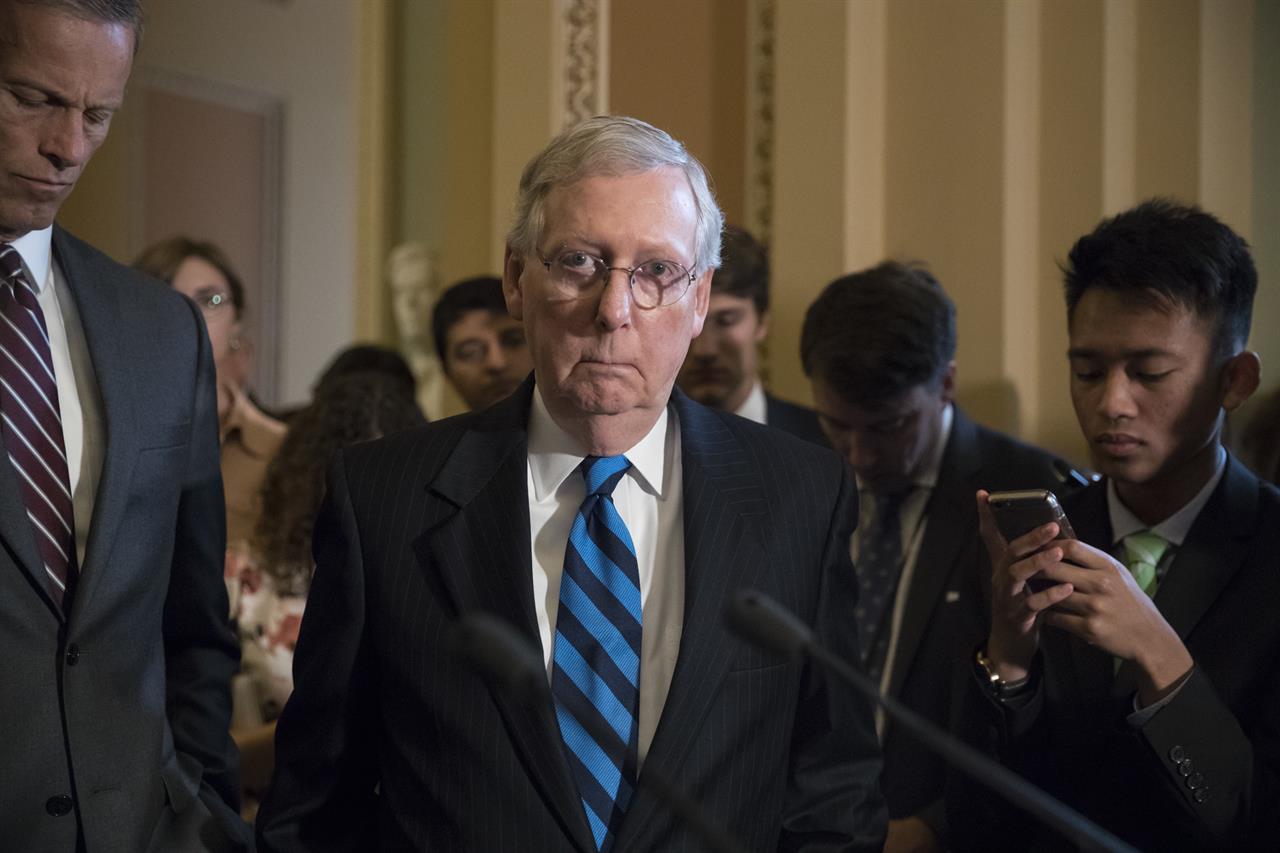 This week, Mitch McConnell sounded the surrender for his laughably awful “health care” bill, the secretive and hurried Senate take on Trumpcare in the wake of an uncharacteristically self-aware response to the House version on the part of the Senate GOP. Faced with the blatantly horrid House version championed by Paul Ryan and rushed out for the purpose of securing Trump’s adulation first and making others do the grown-up work, the Senate correctly determined that with blame already sitting on their shoulders no matter what, they might as well take the time to write a better bill.

Of course, knowing that’s the thing to do and actually doing it are two very different beasts. Legendarily different. Like if we were to use a Japanese mythological context, the former might be Suzaku the Vermillion Bird, a phoenix-like figure rising proud and determined amid the blazing fires of rebirth. The latter might best be represented in turn by Genbu, the Turtle with a Snake on his Butt. I can’t imagine why Senatorial inaction might make me think of a turtle who’s also a real snake, but I shall continue to ponder.

The saga of the Republican masterstroke health plan, the one that has definitely existed since the Obama administration and was better in every way, grows increasingly farcical every month. First there was the day-one question of “so where’s this plan?” that evolved into “we’re writing down the plan we already definitely had.” When it reared its head in the House as a predictably terrible piece of legislation, Trump and his cronies were quick to fête it as a brilliant delivery of everything he’d promised… and then as an important first step before working on delivering everything he promised… but hey, let’s have a celebratory party in the Rose Garden anyway. After all, it was the first legislative victory (of a kind) for Trump and his administration. Nevermind that the Senate had already stated they wouldn’t take it up – the “moral” victory, if I may use that word, was won.

Cut ahead to the Senate working on their own version, composed by old white men keeping other old white men in the dark to the point that John McCain (who said he’d support the bill regardless) was heard bitterly joking that to the best of his knowledge no Americans had seen the bill – though perhaps some Russians had. Now the House bill, the one celebrated by Donald Trump, was deemed “mean” by one Donald J. Trump of some notoriety. It was great, brilliant, fantastic… and uh oh, unpopular? Not something that a rampant narcissist wants to remain tied to.

As the Senate toiled, we were reminded of the larger backdrop for healthcare in the Trump era, that while “repeal and replace” was the ostensible goal, the most important element was not “replace” – ensure health care for people first and foremost – but “repeal,” removing those nasty taxes on the wealthy. If he couldn’t get his way, Trump warned, he would be more than happy to simply take steps to let Obamacare fail, and only then (you know, after assuring the suffering of countless Americans) would he use that leverage to get the other side to the table.

Nonetheless, his threats and cajoling have once again come to naught, as four Republican senators took to the podium to announce their opposition. The far right and the moderates both had reason to sneer at the bill, and so McConnell pulled the vote rather than watch it fail. Into this void have come Trump and his mouthpieces, arguing that Republican senators opposing the bill lack loyalty to their country. Trump’s own argument is even more ridiculous, asserting first of all (and meaninglessly) that it’s time the Senate shifts to a 51-vote requirement for all business. Note that this wouldn’t help him in this circumstance. He also took the opportunity to say that “48-4” is a pretty good score, neglecting to realize that the score was actually 48-52, and that health care is neither a horseshoe nor a hand grenade. Finally, he took the opportunity to once again blame his failure to demolish American health care on the Democrats, as one does.

While some Republicans are quietly muttering about the possibility of delving into that strange and dangerous realm known as “bipartisan cooperation,” the head honchos are having none of it. In the wake of the House bill not being taken up and the Senate bill not making it to a vote. Trump has made it clear that he wants to strangle Obamacare and force through a “win” that way. McConnell, meanwhile, has made it nakedly clear that his true priority has always been to pass a tax cut bill that had some health care riders on it to make it more palatable. If the health care component is too burdensome and is weighing down his true priority, then it only makes sense for McConnell to cease pretending and openly pursue his true agenda.

In the sixth month of the Trump administration, it has become abundantly clear why a Republican House, Senate and White House have collectively failed to pass a Trumpcare bill: it’s because Trump does not care, and nor do they. Trump’s priority is and has always been the amount of personal adulation he receives, and he will say and do anything in service to furthering his notion of himself as powerful, decisive, successful, and loved. Mitch McConnell’s only priority is cutting taxes for his wealthy donors; anything else is fluff. As for Paul Ryan, perhaps the strangest creature among them, his overwhelming desire continues to be, as it has always been, to unravel entitlements and roll in survival of the fittest.

For the moment, then, expect the notion of “repeal and replace” to find its way into the annals of history – not the well-read section about successes and major events, I’m talking about the dusty parts, the forgotten chapters that only get cracked open when some student needs to get into the guts of another matter. With this failure, “replace” is about to get repealed from the Republican vernacular. Expect a clean bill to repeal Obamacare, with no solution in sight for the thousands of Americans who so very badly need it, within the coming weeks. It’s obvious that McConnell is tired of the snake on his hindquarters taking bites at the back of his own head; now he’s going to do his best snapping-turtle impression and see if he can’t inject some poison into the well-being of lower-class Americans at the same time.

2 thoughts on “Repeal of Replace”