Shut Down And Dance 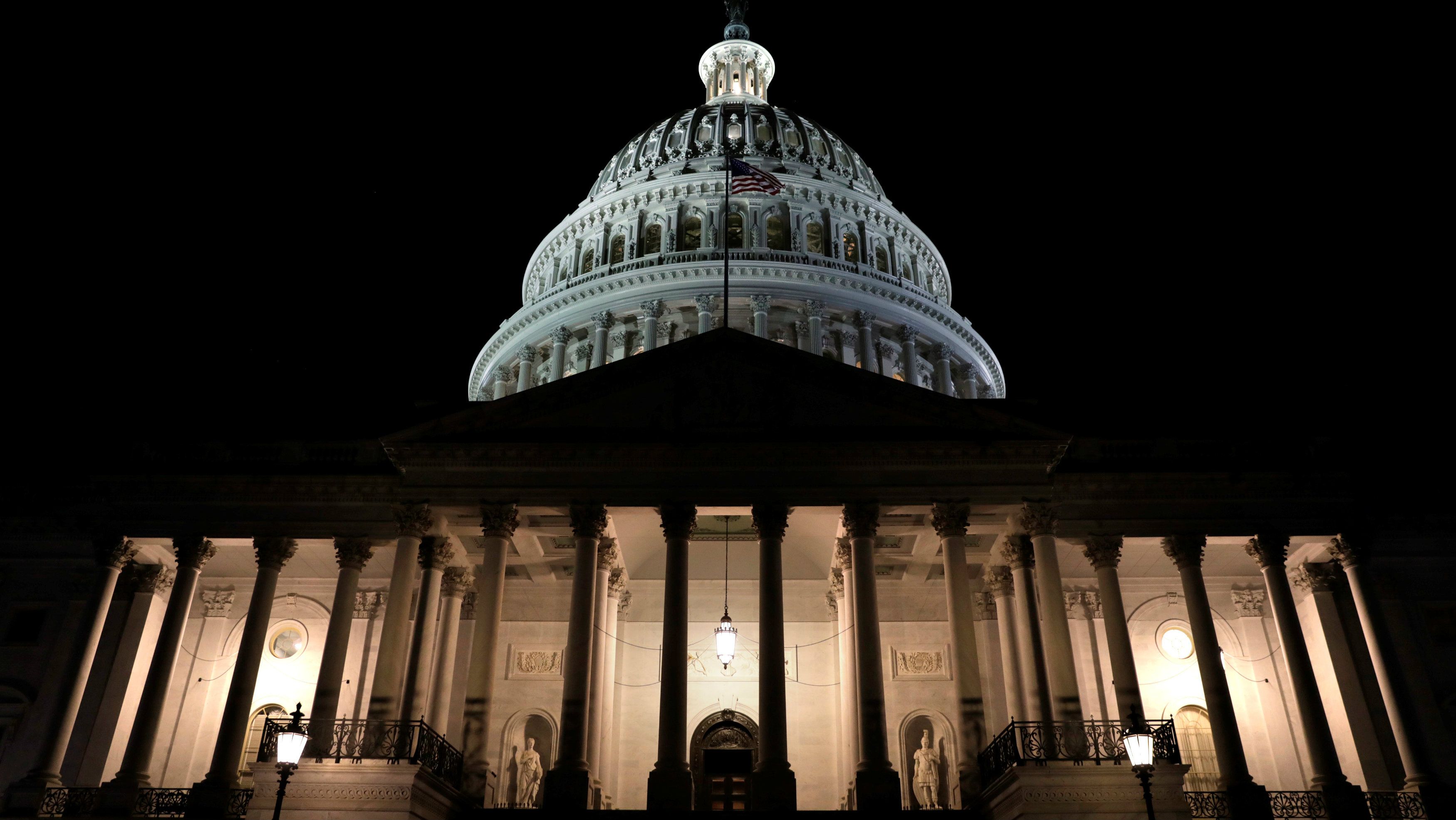 A government shutdown is invariably the product of feckless, narcissistic, lazy thinking coupled with the hope of profiting from the politicized misery of those left to suffer as punishment for the intractable and unreasonable eleventh-hour goalpost-shifting of a party which has already laid plans to ship out crocodile tears by the bucketload.

So having one under Trump was inevitable.

The question the talking heads have enjoyed chewing on during the lead-up to the inescapable shutdown is now readymade fodder for the polemical punditry set – who’s to blame for this shutdown? Democrats are blaming Republicans, Republicans are blaming Democrats, and nobody possesses the kind of middle-of-the-road credibility America once prized so highly to deliver a fair and impartial evaluation without coming across as partisan.

I’m hardly an unbiased observer myself, as my distaste for Trump and for most Republican political priorities is a matter of extensive record on this blog. Nonetheless, I think it’s important to at least attempt to evaluate what has actually transpired here, because everything I’ve read tells me that both sides are rushing to simplify a confusing, tangled, intractable mess.

One thing seems clear from the outset: at a certain point, Republicans were laying plans for the shutdown to happen. Before the clock struck twelve and the government turned into a pumpkin, they had already set up a website to fling blame at Senate Minority Leader Chuck Schumer and planned an extensive social media salvo, #SchumerShutdown, an instruction which appears to have gotten out to every department save the Oval Officer (the Orange One instead used #DemocratShutdown, because he’s an idiot). That being said, I don’t believe this was any kind of grand plot on the part of McConnell and Ryan to throw a stinkbomb into their own Congress – they have to know that a shutdown under single-party control of Washington just isn’t a thing that you can blame on the other team.

No, if anything, the preparations seem to have been a kind of fallback plan. It’s clear that McConnell was expecting a last-minute deal to come together, and from his comments earlier in the week, he’s privately putting the blame for the shutdown with one person in particular. That person, a self-proclaimed master negotiator, started off the week by saying any number of different things about his stance on the matters that caused the shutdown, paving the way for a frustrated McConnell to gripe that he’ll move forward with a bill as soon as he knows what the man in the Oval Office actually wants.

The trouble with that, of course, lies in the premise – all that Trump wants is for all to hail the brilliance of Trump, and that’s not going to happen. If there was any chance of it, it might have come of a meeting between Schumer and Trump at which, Schumer tells us, he offered Trump money for his vaunted, long-desired wall in exchange for concluding the matter of DACA. Trump hasn’t denied this report, which suggests that it’s true – and it’s not exactly the kind of thing the minority leader wants to make up, given that for many Democrats that offer crosses a line.

So let’s unspool what’s behind the shutdown, officially and ostensibly. The Republican contention is that Democrats have shut down the government because they refused to authorize a continuing resolution – an extension of funding for roughly another month – without an agreement made on DACA, the program that protects the residency and status of some 700,000 persons who were brought into America illegally as minors and whose dubious status is not their own fault. As part of a power move in the face of his floundering and failure to score a win with Obamacare in 2017, Trump moved to end DACA so that he could look tough on illegal immigration, only to face a backlash and backpedal into saying that he wanted Congress to “solve” it. The deadline for such a solution is in March.

Trump has been moving the goalpoasts on a deal for DACA since the lone bright spot in September, going from a deal with “Chuck and Nancy” to secure the future of its protectorate in exchange for added border protection funding. Then, as Trump is wont to do, he changed his mind based on what the next person he spoke to told him. Additional requirements were layered atop the original deal, because a Trump deal isn’t a Trump deal unless you leave with nothing but a feeling of vague filth all over yourself. It wasn’t just Democrats hoping to conclude DACA – several Republican Senators have been hoping to conclude the matter, and they’re tired of kicking the can down the road. It’s likely that anti-immigration hardliners in the Trump administration plan to procrastinate DACA out of existence, and McConnell hasn’t demonstrated any plans to stand in their way.

Then there’s CHIP, the Children’s Health Insurance Program, which protects the children of low-income families who are just above the cutoff for other government health insurance programs. This popular plan, which has bipartisan support, was allowed to fail its reauthorization in the fall as Republicans spent their energy pursuing the tax boondoggle. What should have been resolved months ago has been turned into a bargaining CHIP, because of course it has. Republicans offered to attach a six-year reauthorization to the continuing resolution, as though that’s a gift for Democrats and not a restoration of basic human decency. Give McConnell some credit for leveraging the supposedly unleveragable, I guess, though GOP attempts to spin the shutdown as Democrats abandoning sick children are in for a rude surprise when the American people remember that the program was put at risk because of Republican idleness and political chicanery. It wasn’t Democrats who put CHIP in this position.

Then there’s the prospect of an actual budget, a longform authorization to cover matters for another couple of years. Word has it that both sides have negotiated their spending demands and come away satisfied – but Democrats won’t agree to conclude the plan without a DACA deal. So let’s walk through why not.

Trump has been all over the map with DACA – first the punt to Congress, then saying he’d sign any DACA fix that came to his desk, then moving the goalposts in his demands on what would have to come with it. A proposed bipartisan agreement was arranged earlier this week, only for Trump to blow it up – this is the infamous “shithole countries” meeting. Next came Chuck Schumer to deal with Trump personally, and the minority leader walked away believing that he had made an agreement with the boastful bigot to extend government funding for another 4-5 days so that an arrangement could be put on paper and this whole mess could be concluded.

Then Trump spoke with John Kelly.

And now we’re caught up to the present, where Trump and the Republicans are demanding another four-week continuing resolution (some discussion has been made of three weeks) before DACA will receive any discussion. With the deadling looming perilously close, it’s not hard to see why GOP senators such as Jeff Flake and Lindsay Graham have thrown up their hands in disgust and joined the Democrats in voting against such a measure – it’s essentially a naked signal that nothing is to be done to save DACA, and that when the next deadline arrives the circus will be back in town. Let’s say this CR had already gone ahead – everything the GOP and Trump have done on this occasion to tar and feather the Democrats on the matter of immigration would show up again a few weeks later. It’s the play they’ve been waiting to make.

So who’s to blame? Certainly Congressional Republicans could ignore their lord and master and just cut a deal on DACA. It’s not as though the program is particularly toxic among the GOP base, or with Independents – sure, a small and vocal minority are hardliners on immigration matters, but incrementalism is the way of governance, and in any event they do still hold both the Oval Office and control of Congress. The changes they want to make are still within their power to effect – and it’s not like they’ll be short on leverage anytime soon if their willingness to burn critical programs such as CHIP is any indication. So some of the blame has to come here, since their cravenness is creating a sticking point out of what should be, to them, a non-issue – and which is a notable issue for the other party.

Most of it, however, must lie with the man in the Oval Office. Trump doesn’t know what he wants from a policy standpoint – he just knows that he wants to be a winner, and he wants Democrats to be losers. There’s no ambiguity here – “losers” is the official language used by the White House Press Secretary in this matter. It now appears that Trump may have been led into engineering this shutdown by his advisors in pursuit of a goal he’s long desired, however. Going by his latest round of tweets, Trump seems to think that this is a golden opportunity to once again jockey for McConnell to activate the so-called “nuclear option” – reducing the threshold for legislation to pass uncontested to a simple majority of 51 votes in the Senate.

It’s clear that the government shutdown is feeding into two of Trump’s major desires – the desire to be seen as tough on immigration, and the desire to wield autocratic control of the American government, with the Democrats powerless to contest any of his moves and the lickspittles in the Republican House and Senate Majorities too cowed by the vocal energy of his restive base to push back against him. He’s also celebrated it as a “present” from the Democrats, while simultaneously taking time out to whine, to pose for cameras, to preen, and to posture.

In short, the shutdown is everything Trump wants, and there’s no chance we haven’t gotten to this point because he and his team have deliberately gone out of their way to make it so. There have been several opportunities to seize the reins of governing and put the DACA matter to rest, but the value of doing so would seem to pale in comparison to the opportunity to look strong, righteously indignant, and hamstrung by the “excesses” of the American legislative system, the rules that require some measure of discourse and negotiation between parties before the powers of government can be enacted.

The simple fact is this – the continuing resolution would never have solved this matter. We would be here, in this same position, only in February instead of January. Trump has no intention of governing, nor does he have any plans to accept a deal on DACA. Given that the DACA situation is his own fault, and one that he’s led on both parties with, I think it’s only fair to say that the blame for this shutdown lies with the person it was always, invariably, doomed to.

I can think of no more fitting way to mark his first year in office.