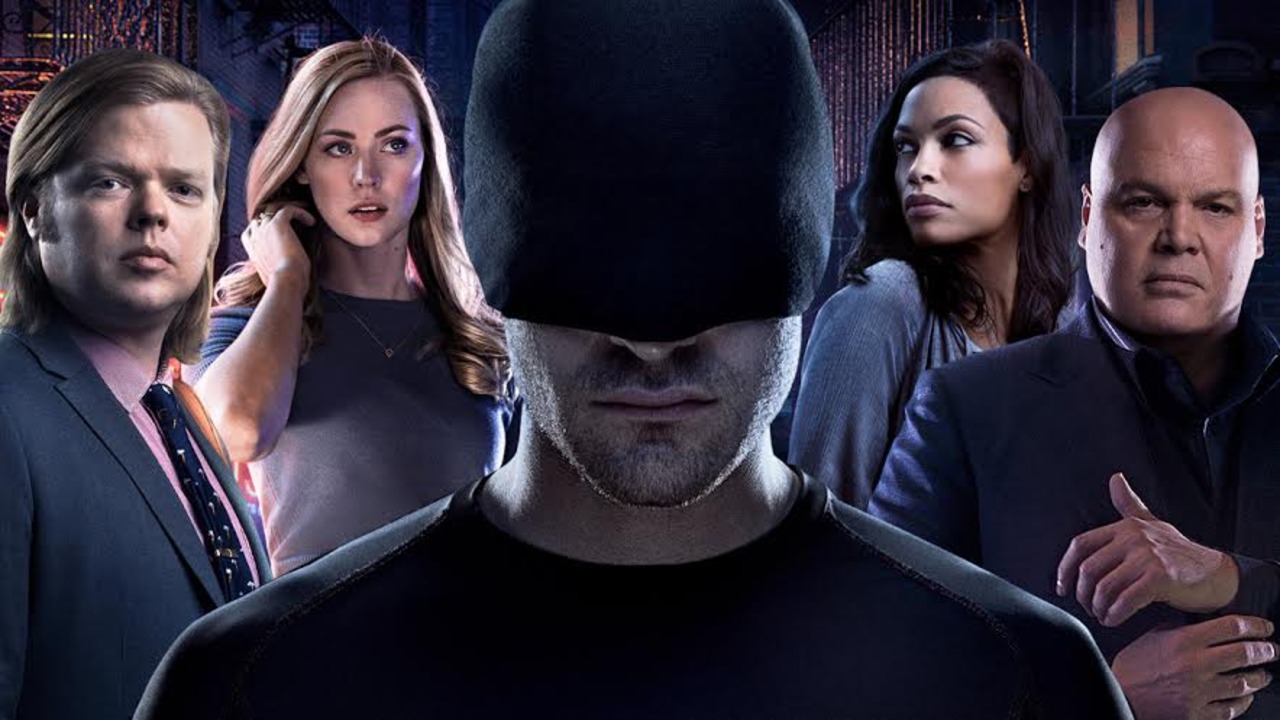 On August 18, Marvel and Netflix fans will be treated to a long-awaited crossover: The Defenders, which unites all four Marvel Netflix series together for the first time. A sort of street-level Avengers, if you will, except it’s been openly part of the plan since the release of the first series, Daredevil. Before we see the payoff of two years’ wait, I felt it would be instructive to go back and look at the road Netflix has traveled to bring us here.

The first installment in the journey, of course, was Daredevil, an action crime drama about a blind lawyer who becomes a brutal vigilante. Played by Charlie Cox, Matt Murdock has been blind since a childhood accident robbed him of his sight, and possesses extraordinary abilities only insofar as his other senses are heightened above those of other sightless people – implied to have something to do with the chemicals his accident doused him in. Trained by a blind martial arts master, Murdock has mastered hand-to-hand combat using a style best described as “violently efficient.”

The first season introduces us to Murdock & Nelson (that’s Franklin “Foggy” Nelson to you), attorneys at law… whose threadbare budget can barely buy them office space. Seems both turned down lucrative job offers to pursue justice and good works, which may feed the soul but aren’t great for the bills. When client Karen Page is framed for murder by her embezzling bosses, Murdock and Nelson use journalist Ben Urich to expose the truth. This gains them Page as an employee and the figures of the Hell’s Kitchen underworld as new enemies.

Murdock’s character is informed by a Catholic upbringing; in confessional sins, he seeks forgiveness from his priest for the sins he has commited, as well as those he plans to commit. Justice is blind, but it’s not deaf – Murdock knows that he’s become “the Devil of Hell’s Kitchen” and his nocturnal activities are filled with the sounds of gunfire, glass breaking, bones snapping, and people screaming. Handsome lawyer Matthew Murdock is, by his own admission, little more than a shell for the Devil to hide inside during the day. Clouding the morality of this Clark Kent persona is that Murdock, as an attorney, has taken an oath to pursue legal justice rather than taking the law into his own hands. His alter ego is anchored around a lie.

The features of that lie are, of course, his best friend and partner, the former client who now has a crush on him, and the access to information he gains via his legitimate business. As his relationships strain due to his secrecy and the escalation of his nocturnal war, the forces of Hell’s Kitchen also descend upon the Devil, determined to expunge the violent vigilante as he pulls at the threads of a much bigger operation. Even as the pillars of a villainous conspiracy are toppled one by one, Murdock must contend with escalating injuries, a fraying sense of personal morality, his own ignorance of his limits, and the oft-caustic defenses he puts up against those closest to him to conceal the truth about the monster within him.

That villainous conspiracy makes up what may be the best part of Daredevil: a four-pillared organization devoted to selling heroin to the people of Hell’s Kitchen. The Russians, a pair of brothers who handle distribution; Leland Owlsley, the financier who launders the money; Nobu, whose faction provides operating capital; and Madame Gao, who produces the heroin. All of these work under the auspices of middle manager Wesley and his “employer,” the reclusive and private Wilson Fisk.

Vincent D’Onofrio brings force and power to the screen in his portrayal of its villain, the Kingpin before he acquired the title. Wilson Fisk is another monster in the skin of a man, but he’s known about his violence since childhood and is desperate to hide it, from others and from himself. Fisk is soft-spoken, shy, and deeply averse to publicity – a far cry from most villains, and portrayed in a way that evokes a strange sympathy. He’s haunted by a piece of art and beguiled by the woman who sells it, opening up to her cautiously and with uncertainty in a way Murdock never would. The vulnerable villain’s reserved facade, however, gives way with shocking speed when he’s angered – brutal and impromptu murder is his forte, with a particularly hands-on touch. The crumbling of Fisk’s privacy as his empire begins to shake is met with a personal reinvention in the public eye, outflanking the Devil of Hell’s Kitchen by taking on the role of a public benefactor attempting to rebuild his neighborhood.

It’s truly a shame that most of the cast doesn’t get this level of detail and personal reflection – particularly Foggy and Karen, whose narrative often feels marginalized against the violent action Matt Murdock calls home and the brooding introspection and character development of Fisk. Capable writers are on staff, and the team tasked to make their vision a reality can deliver some incredible shots. The “hallway scene” will never fail to earn a mention when discussing the first season of this show, a reference to an effort that understands the need to make a strong statement and then does so. While few other action scenes in the show are as clean, the brutal efficiency of Murdock’s fighting style never fails to impress, and each of the more notable fights has a character and pacing all its own.

The vision for this series: Miller-esque, with introspection on its own moral cloudiness and a devotion to unrestrained and brutal violence. If the pitch was for envelope-pushing fight scenes mixed with some excellent character beats, then Daredevil has paid off in spades. The question, of course, is whether Matt Murdock and his supporting cast can rise to the level set by Wilson Fisk as a character.