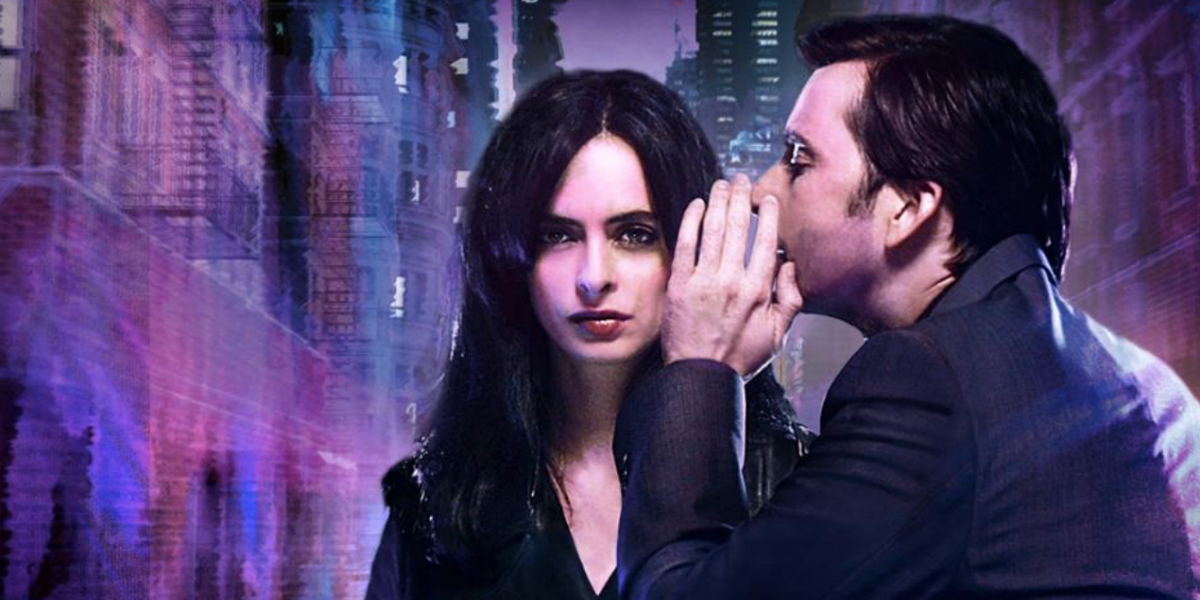 Last time, we visited the beginning of the Marvel/Netflix teamup with gritty action series/crime drama Daredevil. Released to critical acclaim, Daredevil paved the way for a more mature branch of the Marvel Cinematic Universe on the small screen. The next question for the partnership was whether they could catch lightning in a bottle a second time, with a twist: the next property to be adapted was much less well-known than Daredevil.

Let’s be fair: who else outside of hardcore Marvel fans was aware of Jessica Jones as a character? Growing up, I had at least heard of Daredevil in conjunction with the major superheroes of the time (thank you, Spider-Man trading cards) but Alias was released in 2001 through the MAX imprint, Marvel’s R-rated line. She was never intended for kids to read.

So who is Jessica Jones? A low-end private detective with a side business as a process server, Jessica Jones is an orphan who acquired exceptional strength (which can also be used to leap and fall with surprising prowess) in the chemical truck collision that killed her family. Jessica is haunted to the point of PTSD by her past life experiences, and has shut out or frayed all of her personal relationships. Now her life consists of avoiding her irritating neighbors, hooking up with the odd handsome bartender, and getting work from high-powered attorney Jeri Hogarth, who finds Jones too qualified to stop hiring.

The plot kicks off when Jones is contracted to track down Hope Shlottman, daughter of a worried couple who haven’t seen her since she started acting strangely. Jones finds Hope and brings her back to her parents, only for Hope to murder them both in cold blood, resulting in her immediate arrest.

Hope’s situation appears to be the work of a man named Kilgrave, the PTSD-inducing wraith from Jessica Jones’ past who she last saw being struck by a bus. Jones quickly discovers that Kilgrave survived their last encounter, and resolves to bring him in by any means necessary in order to prove Hope Shlottman’s innocence and find her own vindication for the life Kilgrave stole from her. As she closes in on her sociopathic adversary, Kilgrave becomes aware of her pursuit, and Kilgrave’s own obsessions rekindle in a dark game of cat and mouse with murderous consequences.

Krysten Ritter leads a fairly good cast, taking the snarky and sarcastic character she’s become known for in past works and giving her an undercurrent of real pathos, stress, and pain. Jones has a wounded-animal vulnerability lurking under her tough-as-nails exterior, and Ritter’s portrayal gives Jones’s drinking problem the quality of someone trying to disinfect her soul.

Where Ritter succeeds, however, David Tennant thrives as he gives life to the unfathomably monstrous Kilgrave. Possibly the darkest villain to date in the Marvel franchise, Kilgrave is also among its most venal offerings, a hedonistic and self-absorbed manchild in a purple suit. His power, given a stark and horrific realism in the series, is akin to mind control: he tells someone to do something, and they will do it. Jones was a previous victim: a kept pet, living doll, and sexual slave. As experienced by other characters, Kilgrave is a walking abyss of human misery, a black hole whose every impulse has life-shattering ramifications. Kilgrave is able to use his abilities offensively by turning anyone into a potential weapon; defensively, he employs them by programming others to kill themselves should anything happen to him, threatening Jones’s conscience with more death and suffering.

The series is at its best when making use of Kilgrave’s endless capacity for horror, the literal nature of his words being driven home with creative vigor. Unfortunately, the mandated 13 episodes feels stretched and padded, in no small part thanks to the overstayed welcome of policeman Frank Simmons, an early Kilgrave drone who is more than he seems. The quest to save Hope also ends up feeling stretched, especially as the audience sees Kilgrave’s tally of sins growing so massive that no justification seems sufficient to leave him alive and breathing.

It’s also been pointed out to me in a recent thinkpiece that the noir atmosphere of Jessica Jones is undercut by the lack of central mystery; the narrative stakes of the superhero genre, which this show still pays lip service to, don’t allow for a universe in which Kilgrave triumphs over Jones – she’s in The Defenders, so we know the hero doesn’t die. Arguably the series tries to put a few threads into question, but as noted above, the Hope Shlottman story runs rather thin and serves more as an excuse to keep the chess game from ending early.

The series does some requisite setup and drop-ins, including foreshadowing Hellcat and giving us the villainous Nuke as another threat for Jessica Jones to face. We also meet the next Defender in line, Luke Cage, in the very first episode of this series. To some extent, the comic book elements are questionable against the backdrop of this series, which goes beyond the conventional notions of “dark” as it delves into the horrors of PTSD, rape, and pure unbridled sociopathy. My favorite way to describe the show to people is to allude to any given show that is “dark” and then refer to Jessica Jones as “black” for contrast. Hyperbole, perhaps, but not much on TV dares to walk down the same alleys as Jessica Jones operates in.

The vision for this series: a female-led exploration of PTSD with a lead who is an acknowledged rape survivor facing off against her rapist, a repeat offender effectively above the law. The quest for justice in a society that literally cannot acknowledge the evil of the perpetrator and blames the victim, a society that barely even acknowledges Jessica Jones’s strength both physical and emotional, has powerful resonance and relevance in our own culture. Jessica Jones may be a flawed series, but at its best it offers – bar none – the best and most tense narrative that the MCU has ever delivered.