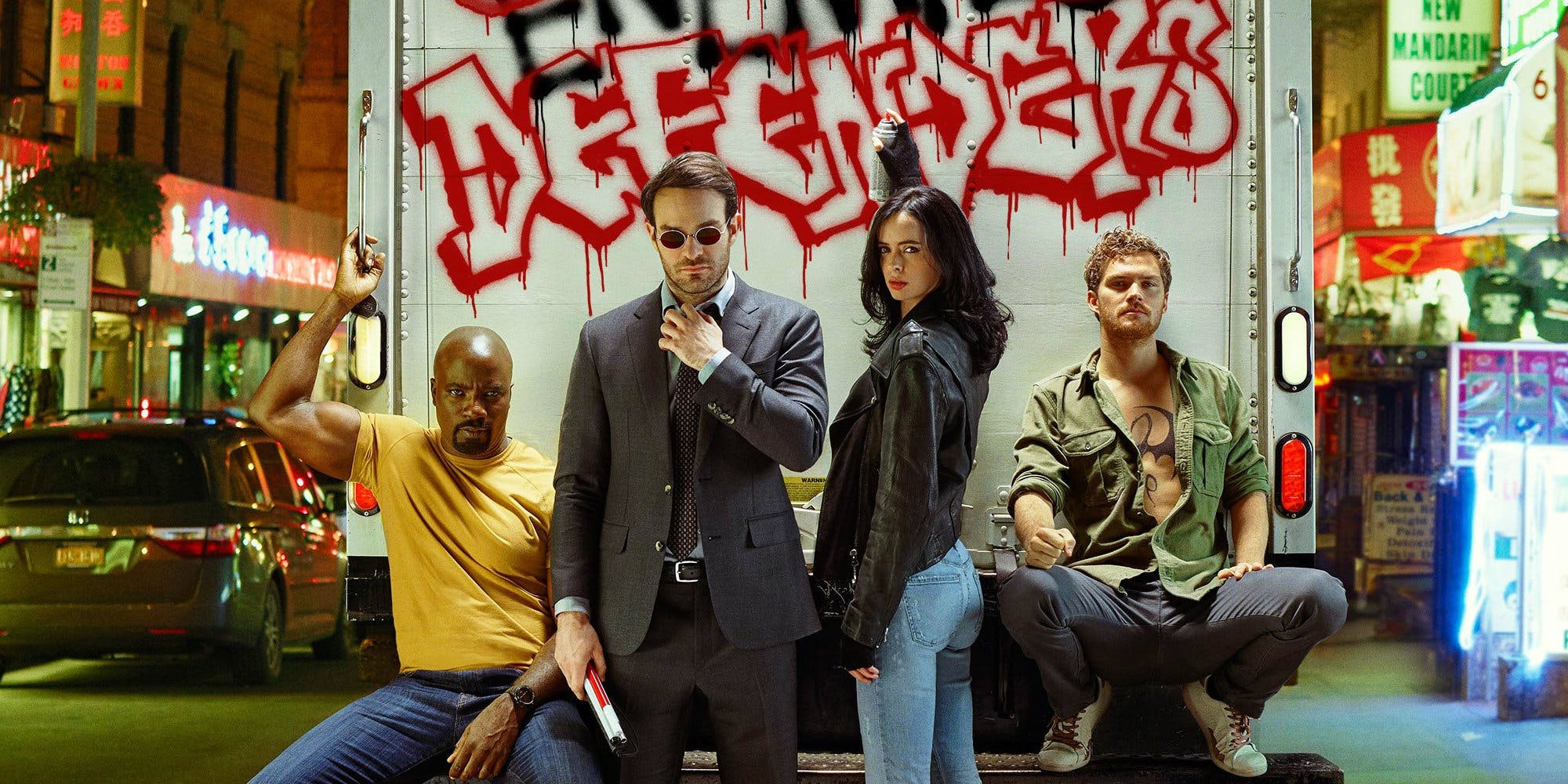 Well, you knew this was coming. One power marathon later, the same-day review of Netflix’s big crossover three years in the making is here. A series that draws from four (arguably five) distinctive visions for superhero narratives, drawn from four (again, arguably five) distinct genres married sometimes competently, sometimes clumsily to the tropes common to comic book heroes. When Marvel pulled this trick on the big screen, audiences paid off their risky bet to the tune of over $1 billion. Now it’s time to talk about the small screen version.

The Defenders picks up where Iron Fist left off, following Danny Rand and Colleen Wing as they pursue agents of the Hand to discover the fate of the lost city of K’un Lun. “Lost” in this case refers both to its mythical status and the fact that it has up and vanished. We also check in on Matt Murdock, who has hung up his horns since the end of his second season and turned pro bono attorney full time. The timeskip hasn’t helped Jessica Jones with her inner demons, still living in the shattered ruin of her apartment/office and avoiding new clients. Luke Cage, conversely, has had a stroke of good fortune, thanks to the legal services of Franklin “Foggy” Nelson at the law firm of Hogarth, Someone and Whocares. He’s back out in Harlem for a long-awaited “coffee” date with a familiar nurse.

Each Defender gets drawn into the same mystery along different threads; Jessica Jones reluctantly takes a job tracking down a missing architect, Danny Rand is warned that the Hand has big plans for New York City, Luke Cage is tipped to the troubles of a young Harlem man running with the wrong crowd, and Matt Murdock gets passed a case file from an old friend to help keep a roof over his pro bono head. It takes these threads a little bit of time to weave together, but the abrasive personalities make for some fun banter once the would-be superfriends start to rub elbows.

The dynamic of the four heroes is made somewhat odd by the narrative gap between Daredevil and Iron Fist (who have dealt with the Hand before and contended with mystical nonsense) and Jessica Jones and Luke Cage (whose superhuman experiences have been grounded in science experiments). The former two display tendencies that verge on childish, while the latter two play surly watchdogs and unwilling participants in a fight for New York City that never really stops feeling vastly silly to them. After all, Murdock and Rand have a personal stake when it comes to these adversaries; Jones and Cage are just looking out for a few people who got screwed over in the process.

The series has the burden of contending with the fact that Danny Rand is a colossal idiot. The method taken to course correct in Defenders is to ratchet up his idiocy, but also make every other character he encounters aware of it. Nobody takes him seriously when he starts acting incompetent, and people are quick to call him out on his privilege, his “thundering” stupidity, and his basic failure to think anything through. In short: Danny Rand is a child, and Defenders has a cast of adults on hand to stop indulging him.

Supporting characters return from every series, though narratively they mostly serve exactly two purposes: establishing what each character has been doing since last we saw them, and being liabilities to protect as the heroes poke the bear and the bear considers poking back. Special mention goes to Claire Temple and Colleen Wing, both of whom get to come into their own as unofficial members of the team. Misty Knight is once again the face of law enforcement trying to get the vigilantes to fall in line. Shortest shrift goes to Trish Walker, who feels like she would have gotten more focus in a longer series.

I’ve protested in each lead-up review that the Marvel Netflix series haven’t been able to justify 13 episodes. Ironically, this brings me to wondering why The Defenders wasn’t made longer – there are subplots and worldbuilding and mystery elements that could have featured the supporting cast more richly and delivered a better-paced story. Instead, while the narrative is quick, it also leaves several spools rolling around the cutting room floor that might have better served the show via their inclusion.

The Defenders always started with the vulnerability of its antagonists being the Hand, the deathless ninja conspiracy that desperately attempts to devalue the word “ninja” every time it appears. By drilling into the mystic and identifying comparatively mundane motives (sadly eliding something more interesting as it goes), The Defenders shows its Hand and reveals that it’s not holding very much. Gone are the eerie and horrific trappings hinted at in Daredevil and the creative and entertaining “miniboss” types that appeared in Iron Fist. Instead, we meet the top brass, and the results vary from “of course” to “why” to “WHY THOUGH.” Special mention has to go to the always-reliable Wai Ching Ho as Madame Gao, who continues to elevate the material and do better by the shows she appears in than they deserve.

Gao, however, is topped in this outing by the woman who stakes a pretty credible claim to being the Hand, the stately and collected Alexandra. Played by Sigourney Weaver (having rather a bit of fun), Alexandra is upfront and on point in a way that throws around both effortless menace and immediate character. The weakest narrative trappings of the organization she heads constantly threaten to undermine Weaver’s performance, but she never lets the show’s weaknesses win.

In most other ways, the antagonists are terribly disappointing – though they pose a wonderful abstract threat, combat with a horde of generic ninjas is typically a dull affair. This leads us to the show’s action direction, which seems to be the portfolio of someone who actually understands how to shoot a brilliant fight and is actively choosing not to more often than not. Too many pivotal throwdowns take place in the dark, being heavily edited, shot at bizarre angles, and lit so erratically that it’s really impossible to figure out what’s happening beyond identifying a hero, verifying that they are punching/kicking/throwing somebody, and occasionally spotting a more distinctive opponent in the fray. This is made all the more painful by the show demonstrating it can do action well in a brightly-lit hallway scuffle brimming with energy and vigor. It’s almost like showing the audience what they want to see results in a better product; go figure.

Other directing elements give the show its own flavor (or lack thereof), for better and worse. Each hero is matched with a color, which typically washes their scenes or is otherwise highlighted in some way – later scenes with more heroes are selectively lit to keep each character in their own color, though the gimmick for the most part cuts off as the team comes together. If the series’s sound were as distinctively geared to its protagonists, it might have more verve and flow, but the generic underscore is just dead compared to the jazzy noir tunes of Jessica Jones or the Harlem beats of Luke Cage. It’s not just a lack of musical themes, either – The Defenders is a show with nothing to say, though at least it’s conscious of that fact and doesn’t pretend otherwise. Regrettably, the two characters whose shows had the most to say are the ones that don’t serve as the narrative foundation. Instead, the series dwells far more than it should on resurrected assassin Elektra Natchios, now known to us as the Hand’s ultimate weapon “Black Sky.” Treated like a daughter by Alexandra and viewed as another victim to save by Daredevil, Elektra is woefully miscast as the emotional heart of a series that should have known better.

In any event, The Defenders is a pretty fun series for much of its run, as excellent performers get a chance to riff off one another and also Finn Jones is there. Sigourney Weaver punches things up a notch, worlds collide in ways both expected and not, and the stage is set for the next run of individual seasons for the various Defenders without forcing previews of upcoming narratives into an already short series. It’s understandably pitched as a show that doesn’t have a purpose beyond a team-up of heroes fighting ninjas, and honestly? That plays out well enough. It’s just that it quickly devolves from “satisfying” to “stultifying” as it whiffs opportunities, wastes a few characters who could have done so much better, and delves down the wrong paths for maintaining an interesting and continually engaging plot. The result is a series that works when it remembers to be fun and fails when it goes for a slipshod conclusion that won’t convince anyone.

The Defenders pays off the crossover premise; it’s just that these four heroes have nothing interesting to fight and too much of the endgame becomes “pretty people punch other people fairly hard.” It’s not the series it should have been, and easily the second-weakest season of Marvel Netflix television to date, but it’s gotten proven value out of running these unlikely allies up against one another and future crossovers will hopefully be a lot of fun to see.