The Man Who Won’t Be King 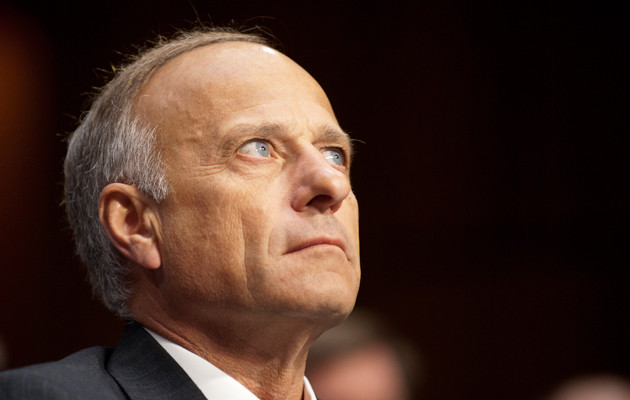 You’ve got to give it to Iowa Representative Steve King, he’s one of the few people in American politics who can out-Trump Trump. It takes a particular lack of quality in a human being to descend to the rhetorical nadir discovered and embraced by Donald J. Trump, but Rep. King has built himself a handy dandy elevator that goes one floor lower.

King isn’t one for living up to the noble qualities of his namesakes real and fictitious; instead, he’s spent a two-decade political career pursuing an agenda so conservative that he voted against his own party (and common sense, decency, basic human compassion) on Hurricane Katrina relief, claiming fiscal responsibility was more important. Fortunately, what he lacks in social responsibility, he also lacks in science education – King likes to assert that if global warming is real, then it’s obviously a good thing! After all, more sunlight and more CO2 emissions mean more photosynthesis for plants to grow big and strong.

“Deliberate ignorance” is the calling card of Rep. King, who has made it a habit to consider the snake’s belly a limbo bar. Take any issue where there’s a right thing to say, and expect King to be looking in the other direction. Take comments by Todd Akin, who infamously talked about his take on “legitimate rape” and was properly drubbed in the election that followed as fellow Republicans turned their backs on him. Remember which way I said King would always be facing? That’s right: “petty personal attacks,” King called comments about Akin’s statement, staunchly attesting that Akin was a “strong Christian man” and that his voting record should be more important than his words.

Cockfighting, dogfighting, both are fine with King, who opposed laws criminalizing attendance at animal fights and prohibiting transport of fighting animals across state lines. Why? Well, because of boxing – you can’t put animals above humans by saying it’s okay for one to fight for entertainment purposes and not okay for the other. Advancing an amendment to end states’ rights to issue rules on agricultural practices within their borders, King dismissively noted he couldn’t “identify unintended consequences.” The rest of the world didn’t have such difficulties – and as it turns out, there’s no political gain to be had from forcing Maryland to allow arsenic in chicken feed. Strange, I know.

Let us not hasten to call Mr. King racist – it may be a disservice to the racists. When former HUD Secretary Julian Castro mentioned the Republican Party’s difficulties with Hispanic voters, King offered this clever retort: “What does Julian Castro know? Does he know that I’m as Hispanic and Latino as he?” Julian Castro doesn’t know that, it turns out, probably because as a thing which is not in any way true, it’s not actually knowable. Nor would it have been remotely relevant to… anything really, any more than it would be relevant for me to ask whether Justin Bieber knows that I’m a space tarantula.

That, of course, is just the tip of the iceberg. Has America had any recent presidents one might take the opportunity to say ignorant racist things about? Let’s check with Steve: “When you think about the optics of a Barack Obama potentially getting elected President of the United States – I mean, what does this look like to the rest of the world?” Thanks, Steve. He further found Obama’s use of his middle name at his swearing-in to be “bizarre” and a “double standard.” Obama pointed out that past presidents have done so with no controversy, but King assures us that couldn’t possibly be the reason.

Then there’s this, which I will simply present without comment: “If you can’t profile someone, you can’t use those common sense indicators that are before your very eyes. Now, I think it’s wrong to use racial profiling for the reasons of discriminating against people, but it’s not wrong to use race or other indicators for the sake of identifying people that are violating the law.”

When it comes to illegal immigration, King has his math down: “For every one who’s a valedictorian, there’s another 100 out there who weigh 130 pounds—and they’ve got calves the size of cantaloupes because they’re hauling 75 pounds of marijuana across the desert.” That’s a pretty ignorant and hateful thing to say, and that’s not coming from me – that’s John Boehner talking. King has shared his hopes for “an America that’s just so homogenous that we look a lot the same” and it’s clear that he’s got a particular look in mind. On DACA repeal, King felt a strong sense of justice: “They continue to live the objective that they sought to achieve when they illegally entered America,” King told reporters. “Live in the shadows.”

However, if you want to see the worst of Steve King – and let’s face it, if you’ve come this far, you’ve got a stomach for terrible nonsense – just look for any time he uses the word “civilization.”

Why yes, this is going to be awful.

You might reasonably ask yourself how any politician could operate this way – even Donald Trump knows how to walk it back from time to time. Not Steve King, who will double down on any comment with “I meant what I said” despite opprobrium from left and right alike. Is this the new standard in the age of Trump? Arguably no – King has been doing this sort of garbage since well before the Orange One ascended into mainstream politics. This, instead, is the product of a kind of strange, festering incumbency; Iowa’s failure to sufficiently challenge King either on the left or the right such that he might get displaced. As InsideGov’s “least effective member of Congress” for 2015, King has a track record of failing to advance his amendments or get legislation out of committee, and has found a way to disgust and alienate most of the members he’d need to work with to actually achieve his own goals, such as they are.

In short, King’s horrendous tirade is the product of a man whose political ambitions have atrophied; virtually immune to electoral defeat as a US Representative, the 68-year old is also bereft of any vertical advancement – Chuck Grassley is redefining the concept of incumbency, while freshman Senator Joni Ernst is a young up-and-comer and military veteran with unimpeachable conservative bona-fides. The Iowa governorship has never been open when King has been in a position to throw his hat in, and without senatorial or gubernatorial experience it’s a steep road to the White House. That’s notwithstanding the 17-candidate battle royale in the 2016 primary race.

King has nowhere to go but down and he knows it. The result is an incredibly toxic political liability for Iowa to contend with, a waste of federal-level representation for that state whose ineffectual committee record and reprehensible public comments have torpedoed any political capital he might once have held. Perhaps Rep. King is holding out for a handout from Trump, but Iowans shouldn’t hold their breath. Let’s hope a primary challenge arises where everyone does their best to focus solely on the incumbent – if he wants to keep being King of the Hill, he should be forced to fight like one.