Three Sh*ts to the Wind 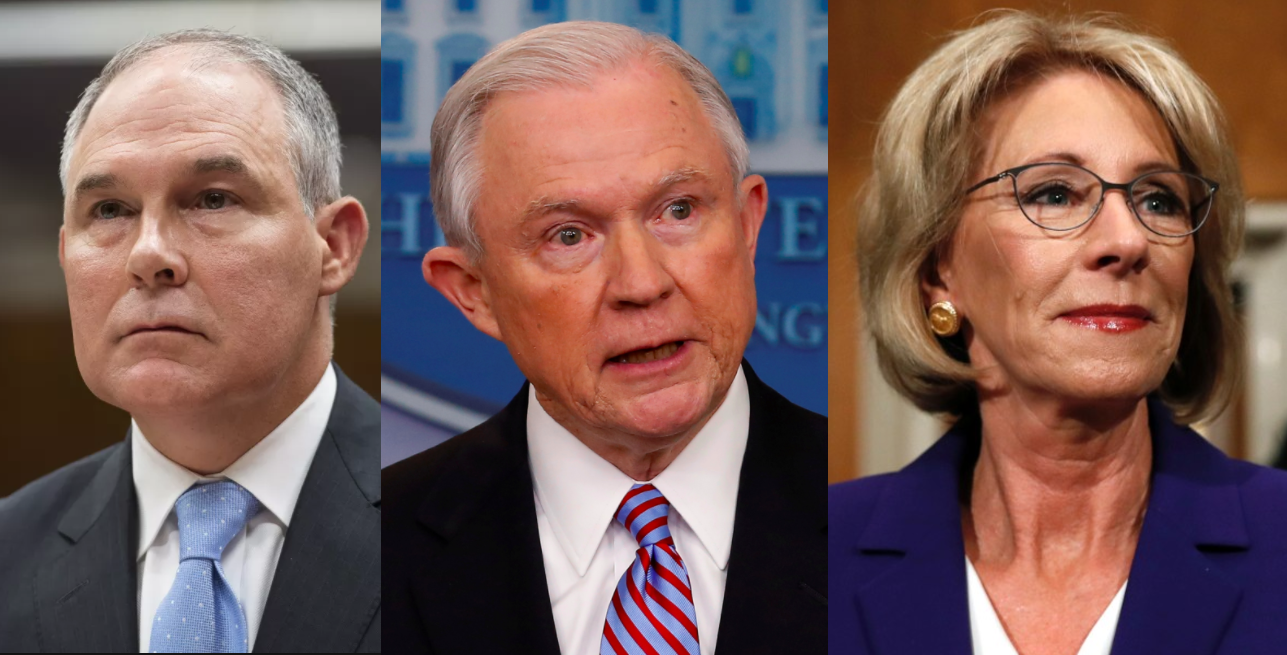 I’d like to congratulate the Trump administration on successfully making an article title go blue before his first year was done. I prefer to avoid vulgarity when discussing the state of American politics, purely because I find it’s already emanating from so many directions that it muddies the important matters. Frustration, despair, and cynicism can dilute the facts at the center of things, and if there was ever a week for frustration, for despair, and for cynicism… Well. Let’s talk about what’s been underway.

America, of course, has been under siege by mighty hurricanes. Under the cover of Harvey and Irma, the Trump administration has pulled some repugnant moves. The man himself started things off by pardoning Joe Arpaio, timing the pardon to the landfall of Hurricane Harvey “for ratings.” As one does. He also put DACA beneficiaries on notice for their free trip away from the only life many of them have ever known.

Today, however, we get to talk about three of Trump’s underlings. We’re already on the subject of hurricanes, so why not talk about Scott Pruitt, head of the EPA. For those unfamiliar with the EPA, it used to stand for Environmental Protection Agency and now apparently means Excusers of Poisoning Air. Pruitt has taken issue with many of his critics, who use things like “science” to undermine his positions. As Pruitt himself protested, “science should not be something that’s just thrown about to try and dictate policy in Washington DC.”

The hurricanes have proven more of a headache for Pruitt than he may have expected, which is why his agency attacked reporters who questioned why EPA agents weren’t on the ground in the wake of Harvey at many of the numerous toxic waste sites improperly secured against weather calamities. The EPA shot back that those reporters dared to undermine public confidence from their comfortable seats in Washington while experts were there on the ground. Of course, one of the reporters was in fact physically present at the Superfund sites – that’s how he knew they weren’t. Nonetheless, the EPA was apparently happy to tar and feather his counterpart, using official channels to suggest that the other member of the reporting team “has a history of not letting the facts get in the way of his story.” Aha, I had the acronym wrong – Executive’s Propaganda Agency. There we go.

Pruitt has found himself in front of the cameras during storm time because people are daring to suggest that the formation of stronger hurricanes might have anything to do with climate change. Mind you, he couldn’t even bring himself to use those words – instead, he alluded petulantly to people “politicizing” these disastrous storms, calling it “insensitive” and explaining all about what people in storm-wracked areas really need at the moment. This, of course, assumes that looking into the causes of major storms and helping those impacted by them are somehow mutually exclusive, as opposed to activities conducted, in the main, by two different groups of people simultaneously.

Let’s turn now to Jeff Sessions – yes, him again – who decided that there’s no time like hurricane time to re-militarize the police, gleefully exhorted the “compassion” of ending DACA, and is currently plotting to administer polygraph tests on staffers to ferret out leaks.

I’m going to be very honest here: there are several elements of the 1033 program (which transfers surplus military equipment to police departments) that are very positive – fax machines, wires, flashlights, sandbags and medical supplies are all among the surplus items made available at significant discounts to police departments who otherwise would be unable to afford these resources. These items, of course, were not controlled – Obama’s restrictions were on “military-grade” hardware, especially when brought into school districts.

If Sessions had brought back flashlights and fax machines, we’d be applauding efforts to supplement smaller law enforcement operations with costly but necessary resources – the kind needed to serve and protect, to search and rescue. Instead, what he’s bringing back are military-grade armored vehicles, grenade launchers, AR-15s, and… weaponized aircraft? Seriously? Why was this ever on the list in the first place?

To be clear, the Obama-era regulations weren’t particularly onerous – while tracked vehicles (read: things that look like tanks) were prohibited to police departments, armored tank-like vehicles that run on wheels were still permitted (despite being the source of controversy in Ferguson). Bayonets were banned. Ammunition and firearms in the .50 caliber range and up? No. “Camouflage” gear unsuited for urban environments except for the purpose of looking like the Army instead of the police? No. Most of the restrictions were actually restrictions rather than prohibitions, requiring local legislative sign-off, forms explaining the intended use of the equipment, and certification of appropriate training.

That’s now a thing of the past; who cares about local oversight from elected officials, training certification, or rationale for use of “explosives and pyrotechnics,” right? Which police department doesn’t need bullets capable of penetrating concrete and commercial-grade walls, as well as firearms capable of pumping out a couple dozen of them within seconds? Who doesn’t love the sight of a tracked vehicle staffed by jungle-camo paramilitary with AR-15s rolling through their school district? There are roles for these tools (well, probably not the tank) in civilian law enforcement, but they are the province of SWAT teams – Special Weapons And Tactics do not need to be in the hands of regular law enforcement officers. A SWAT professional can make use of a .50 BMG round to take out the engine block of a vehicle. Ordinary untrained police have used far smaller rounds to do far greater harm. This is a solution to nothing – it’s pandering, and it sends an unhealthy message to both police departments and the communities they serve.

Finally, we arrive at Betsy DeVos. The head of the Department of Education desperately wishes she had an agency acronym to mangle. DeVos has recently told the Consumer Financial Protection Bureau to get its nose out of government student loans, opening the door to more abuses by the subcontractors tapped by the Department of Education to collect on those loans. She claims it’s in the name of efficiency, but her mandate gives her a perverse incentive to favor financial returns to the government over the fiscal well-being of borrowers, their rights and options be damned. Borrowers, for instance, have a right to file for monthly payments to be measured based on their earnings rather than what they owe – but the paperwork required is costly and tedious for loan contractors to manage, and the government gets its money back more slowly that way. Why not simply get the CFPB to stop requiring loan contractors to offer that service and help people set that up?

That hasn’t even been the nadir of her toxicity this week, as DeVos has decided to move against standards protecting campus sexual assault victims. This is a bit tricky to unpack, especially with the narratives claiming that DeVos’s move constitutes a “rollback” of “Title IX protections.” Title IX does not actually offer any codified protections for campus sexual assault victims – it’s a law that prohibits gender discrimination on the basis of sex at educational institutions. Via a letter of guidance from an Obama political appointee, this regulation was bent towards instructing universities to adopt investigative and adjudicative practices regarding campus sexual assaults and rape that would favor the victim over the accused. With this in mind, what DeVos has done is to issue a new such letter, one that shifts the balance yet again.

This is a more difficult issue than many will portray it as; the Obama-era mandate definitely undermined due process for the accused to the point of skirting Title IX breaches itself in the other direction – discrimination against accused men on the basis of their sex. It also, however, took steps that highlighted the extreme difficulty of securing justice for victims of rape and sexual assault on campus. These difficulties emerged not only through the pragmatic challenges of forcing victims to face their aggressors, but also through ingrained social and sometimes institutional attitudes skewed against those who would speak up and “cause a stir.” Some are entrenched to the point of mania – consider Brock Turner, softballed by a judge who feared the “severe impact” that rape accusations might have on a would-be Olympic swimmer and felon.

DeVos might have a point… were it not for the fact that she ignores statistics in favor of anecdotes and glosses over the experiences of victims in her advocacy for “due process” at the standards of the US criminal justice system for campus disciplinary matters. Title IX has nothing to do with the criminal charges to be filed against accusers; instead, it has to do with how universities will respond in disciplinary fashion to those accused of sexual misconduct. There should, in fact, be a lower standard for process; a faster process to ensure that accused and accuser are both given timely justice; and an understanding that rape and sexual assault are not “both sides” issues.

While Title IX has no force of law to direct sexual assault investigations, the recommendations provided on how campuses should interpret it have brought real change in terms of independent investigation. We can only hope that institutions recognize the positive difference that these recommendations have made in the lives of many victims, and encourage them to recognize that DeVos’s new directives similarly have no force of law. The current standards are still far from where they should be, but DeVos would sacrifice a few victims in the name of saving the innocent accused; while conditions for the latter are certainly not as fair as they could be, conditions for the former have never been fair in the history of American jurisprudence.

Pruitt, Sessions, and DeVos have each managed to take strong steps toward undermining the departments and agencies they serve; however, let us not forget that each of them does so at the behest of Trump, who is making use of Pruitt as a sockpuppet to advocate for polluters, Sessions as an arm’s length mouthpiece for racist policy moves, and DeVos as the reasonable face of a “both sides” argument about sexual assault that he could never credibly make himself. Deliberate ignorance, willful discrimination, and defense of sexual misconduct – these are all facets of the man in the Oval Office.