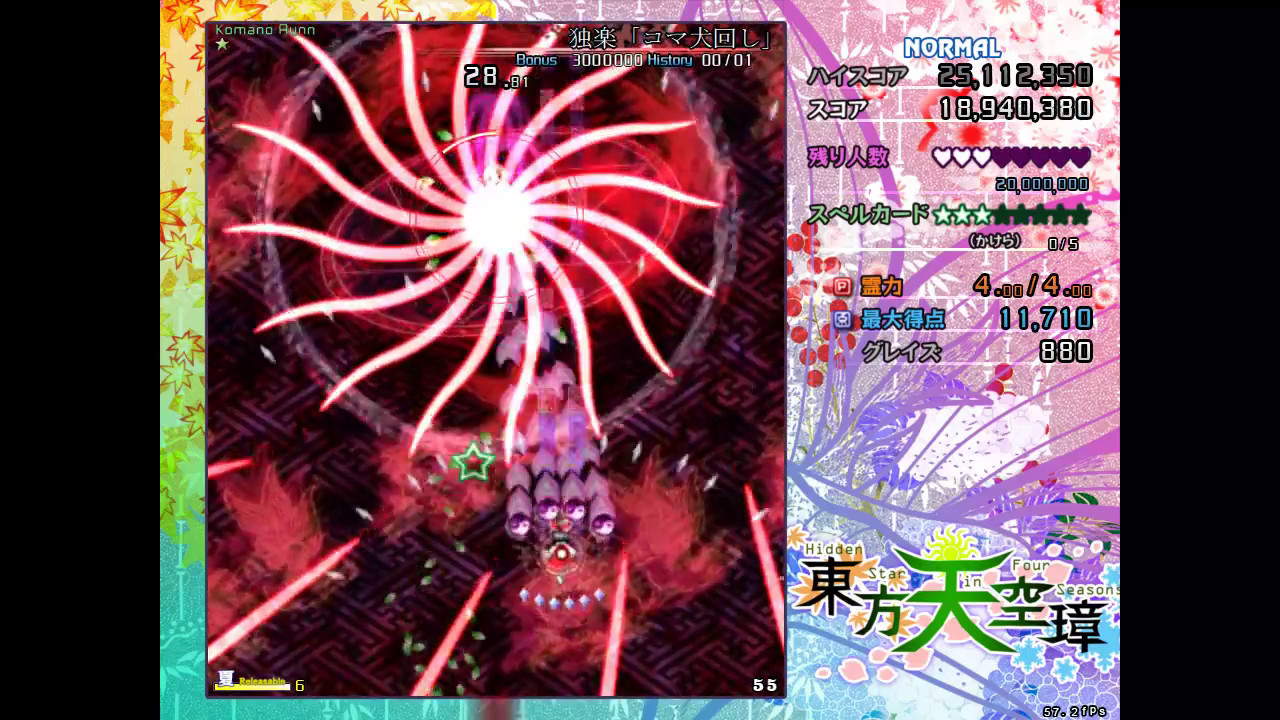 It’s been exactly two years (as of the writing of this review) since the last main entry in the Touhou series was released. I’ve never made it any kind of secret that I disliked almost everything about Legacy of Lunatic Kingdom, which I found to have a lazy back end and a frankly detestable core gimmick that devoured the rest of the gameplay. Considering I was also put off by Ten Desires, that Double-Dealing Character felt lukewarm at its best, and that I don’t play any of the side games, I’ve been on something of a cold streak with the franchise since 2011.

When I received the news yesterday that it had been released, I hoped that streak had come to an end. I eagerly procured a copy through means best not discussed and settled in for some proper bullet hell action. What I got…

Alright, look, I could bury the lede, but I may as well get this out of the way: Hidden Star in Four Seasons is an acceptable but fairly flavorless entry that sets no goals for itself and arguably lowballs some of the important bits. Now that that’s out of the way, feel free to stick around so I can get into the hows and whys.

Let’s start with gameplay: it’s the classic top-down danmaku shooter, and HSiFS is polite enough to keep its small novelties out of the player’s way. Gone are the distracting UFOs, perplexing and ugly spirits, and that bloody-minded Pointdevice Mode – no infinite continues this time. Instead, the gimmick is “seasonal energy,” produced as drops from enemies as well as spawned for grazing bullets. Collecting seasonal energy powers up the abilities associated with your secondary season (effectively four subweapons common to all four characters), providing more offensive capability. Furthermore, charges of seasonal energy can be released as a momentary barrier that nullifies bullets and converts them into more seasonal energy – generally this is diminishing returns, but as a secondary shield it’s nice to have. The defensive aspect of the mechanic recalls a similar gimmick from Perfect Cherry Blossom, and adds more skill to your countless confrontations with hellish barrages of kaleidoscopic death.

That’s right, I’m a big fan of the main gimmick; the worst thing I can say about it is that the collectibles can clutter the screen. I’m a bit less happy with the fact that all four girls use the same four “shot type” selections; yes, that’s 16 permutations, but I really dislike the Autumn option – it feels like a lackluster hybrid of Summer and Winter to me rather than having the distinctive character of shot types past. Spring provides Reimu’s homing bullets, Summer Cirno’s diagonal barrage of icicles, Autumn Aya’s piercing wind gust projectile things (they’re tremendously ugly) on either side in a forward barrage, and Winter Marisa’s chilly frontal laser. Further, each season uses the release effect somewhat differently; for example, Summer is a small barrier but expends only a single charge when fired.

Musically, HSiFS just… never tries to distinguish itself. The soft drum pad that so disgusted me in Ten Desires is still kicking around, and ZUN’s obnoxious electric guitar likes to show up from time to time, but by and large HSiFS is content to evoke better themes from better games and sit back to let you bask in your quasi-familiarity. Stage 1’s theme is essentially “a Stage 1 theme” with some Song of the Night Sparrow undertones. The Stage 1 boss theme could be another stage theme and I doubt anyone would question it (I probably would have preferred it that way, to be frank). Stage 2’s theme reminds me of a knockoff Lunate Elf with some unfortunate Ten Desires elements. The boss theme brings in the grimy electric guitar and in doing so channels Sekibanki’s theme. So it goes, with the rest of the soundtrack channeling “qualities” of Touhou past more than charting its own course.

The next part discusses the plot and characters, so spoiler warning here. Bail out if you so desire.

Gensokyo is being flooded with seasonal energy that is throwing the balance of its weather all askew. Hakurei Shrine is drowning in cherry blossoms, Youkai Mountain is gripped in the throes of autumn, and the Forest of Magic is blanketed in snow. Reimu and Marisa set off to investigate because that’s what they do; Aya jumps in because the disturbance is affecting her mountain; and Cirno, flush with seasonal energy as a winter fairy, is oddly superpowered and wants to go take her powers for a shakedown of whoever’s throwing things out of whack. The chosen protagonist crosses the summery fields and meets Eternity Larva, a butterfly fairy who’s also been juiced up by seasonal energy. From there, they head up Youkai Mountain, pop over to Hakurei Shrine, then end up in the Forest of Magic. That’s when things get weird.

Let’s talk characters; I feel as though Eternity Larva won’t go down as one of the more memorable Stage 1 bosses, though her design is somewhat interesting – representing growth and metamorphosis, she combines elements of butterfly, pupa, and caterpillar. Her “power” is to release smelly danmaku from her antennae when she senses danger. Wriggle Nightbug did the Stage 1 insect better and with more interesting spell cards to boot; you can essentially stand still and watch as Eternity all but completely fails to even attempt to trouble her blind spot.

Nemuno Sakata is a yamanba, a mountain hag with a big meat cleaver whose power creates holy ground. Her “chopping” spell card and dagger bullets are a bit interesting, but the character herself has what I’ve come to refer to as “hair color distinctiveness,” which is when the rest of the design is so bland that ZUN gives the character an unlikely shade of hair to compensate. Aunn Komano, a komainu with a duplication trick, has the distinction of being the friendliest enemy the girls ever fight (to the point that they apologize for attacking her) but reminds me of Ten Desires character designs and has a largely unmemorable boss fight outside of her split attack.

Narumi Yatadera is the fourth boss, though not the next character we meet – and as the representative of the winter stage, she’s little more than another pointless thinly-designed obstacle, in this case a living Jizo statue who can control living things (why yes, this is a massive missed opportunity). Her battle is distinguished by one truly obnoxious spell card that recalls one of Clownpiece’s more irritating attacks in the previous game, as Narumi summons a massive bullet-spewing danmaku that hunts you down before returning to her in a shower of additional bullets. Mostly, she matters because on her back is a portal to Ushirodo-no-Kuni, the “Land of the Back Door.”

In the realm beyond are the paired bosses, Satono Nishida and Mai Teireida. With similar hairstyles and designs, I can’t actually tell you which is which – even though they each carry a different plant shoot. Each one is the midboss of either Stage 4 or 5, and their gimmick is that they change up their spell card selection based on which of them you defeat first during their partnered non-spell card attacks. This would be interesting with more distinctive characters or a better musical theme, but as it stands they feel like Stage 4 holdovers trying to ape the Tsukumo sisters from Double Dealing Character or the Prismrivers.

Taking the cake for lazy character design, however, is the game’s final boss, Okina Matara, a blonde-haired woman wearing a long-sleeved dress with a bright tabard and a curved hat, with fiery shapes trailing behind her… wait a minute, that’s just Junko from the previous game! Okina is a secret goddess who wants to become less secret; intended to evoke comparisons to Yukari, she is also a Sage of Gensokyo and one of the people involved in the creation of the barrier (the game’s characters engage in a surprising amount of “Remember the New Girl”). Her most distinctive attack is her finale, in which she copies the protagonist’s season to… well, fling more projectiles at you. I suppose I’ll have to refight her to determine the relevance of this threat, but the game throws up warning text as though it’s an earth-shattering revelation.

I hate to be that guy, but Satori did this better.

Anyway, this is all a run-up to the reveal of the Extra Stage boss…

Yes, her again. Different sprite, different theme, different attacks, same character. The Extra Stage resolves the leftover threads from the game’s main plot, people tell me, as though that excuses this kind of lazy doubling. Perhaps it’s another Yukari reference, of a sort? I don’t know. I just know it leaves me more irritated than it should, and feeling shortchanged somehow.

I’m at the point now where I legitimately cannot tell if earlier entries had better music and character designs or if it was all just rose-colored glasses. I have a friend who assures me that Imperishable Night represented a significant investment of creative resources above and beyond ZUN’s normal standard, but even Perfect Cherry Blossom and Mountain of Faith felt so much better executed than this. I might put it somewhere in the range of Undefined Fantastic Object, though it must be said that while I’ve always personally had a handle on that game’s bizarre gimmick, I think HSiFS does a better job with overall gameplay.

In any event, I suppose it’s time to sit back and wait to see if the next entry will wow me. In the meantime, there have been worse parts of the Touhou main series, though that’s not as high a bar to clear as it once was.

One thought on “Touhou 16: Hidden Star in Four Seasons”

This touhou game is a dissapointment…..like really ZUN! For the first time, this is the only game that i dislike most of the cast(Except Eternity, and those twins).