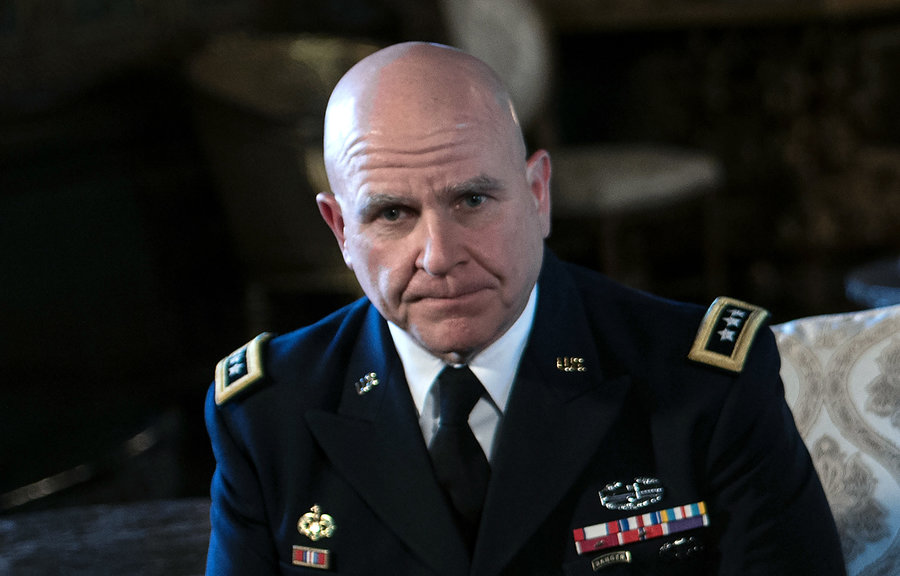 As easy as it would be to assume that this article refers to the revolving door of White House staff whose steady egress continues to embarrass Donald J. Trump, today’s topic title refers to… well, actually, in a way, to the same thing. Carry on.

One of the few moves that Donald Trump took with which I had no objection was the appointment of H.R. McMaster as National Security Advisor. McMaster, a decorated Lieutenant General in the United States Army, brought to his post a wealth of on-the-ground experience from the Gulf War forward, and he has authored a book critical of US military actions undertaken during the Vietnam War, the basis of which was his university thesis. “Unquestionably qualified” has never so well defined a Trump appointment.

So, of course, Trump has a problem with him.

To the shock of no rational thinking person, Trump despises having a rational thinking person telling him what outrageous nonsense he shouldn’t do. For a 70-year old man, Trump is so allergic to adults that it’s hard to understand how he survived infancy long enough to revert back to it. McMaster has butted heads with Trump’s coterie of buttock-moistening enablers, including recently departed author of America’s darkest timeline Steve Bannon. Reince Priebus, former chief of staff, also tangled with the National Security Advisor, and while Priebus has found the door, that doesn’t necessarily forecast smooth waters for McMaster.

There are few things more damning for a Trump official than appearing in the news, and McMaster has found himself the subject of far too many Breitbart headlines in the past few days. The subject of Steve Bannon’s re-baptism into the right-wing news source of no repute, McMaster has been labeled a Quran-kissing apologist, “diametrically opposed” to the views of Donald Trump, and accused of undermining US national security. All signs point to this being Bannon’s warm-up round, and he’s not alone – since McMaster came out against the Charlottesville protests, calling the vehicular murder “domestic terrorism” despite his boss’s meandering walkabout, more of the alt-right have been none too subtly pushing for the general’s head on a stick.

Data analysis suggests that Twitter posts pushing a hashtag calling for McMaster’s ouster were amplified by Russian sources, but as is often the case when it comes to the Orange One, Russia is merely adding gas to the Tiki torch fire Donald Trump has already been holding deep in his festering heart. Trump has openly castigated McMaster in his office in front of other staff, is said to have “screamed” at him on a phone call regarding Korean missile defense, and has complained about “the general undermining my policy” within earshot of other officials.

McMaster first earned the ire of his boss simply by not being Michael Flynn, whose job he took over after the attainted former occupant vacated the position. He accumulated his second not long afterward when he pleaded with Trump not to use the phrase “radical Islamic terror” – a plea that fell on deaf ears. Next came staffing battles, with McMaster wanting to remove a Flynn appointee and retain the services of several NSC staff hired under the Obama administration, despite a Bannon-backed push to purge them. Bannon accused McMaster of attempting to dupe Trump into pursuing “nation-building” abroad, and bitterly opposed McMaster’s vision of the Pentagon taking over supervision of troop levels in Afghanistan, bypassing further White House oversight.

The campaign against the highly-qualified NSA is being funded in part by Sheldon Adelson, the repugnant casino mogul who funded Newt Gingrich’s last attempt at the presidency. Its participants are a who’s who of repellent alt-right figures, and they’ve already lined up a pitch about McMaster’s supposed alcoholism, a baseless allegation that may actually backfire on them for how nakedly contemptible it is.

Meanwhile, Trump is moving forward on his own address to the Afghan quagmire, which he plans to present to the country tomorrow evening. McMaster was part of those talks, as was occasional ally John Mattis, Secretary of Defense. Whether their counsel has had any impact on the reckless narcissist they work for remains to be seen, but it can’t be a coincidence that the knives are out for McMaster at the same time that Trump plans to expound on his new strategy in the region.

Not that McMaster has much to lose by walking away, of course – Trump has been an unstable employer and an unwilling student, angrily lashing out at McMaster for being the voice of reason and undermining Trump’s mania just by existing. When Trump tried to tell South Korea that they should pay for a missile defense system – one that the two countries had already agreed would be furnished by and funded by the United States – a phone call from McMaster reassured them that the agreement would be honored, saving America’s international reputation and smoothing over a wrinkled friendship but setting off the Orange One in the process. Nothing undermines Trump like a commitment to being loyal to one’s obligations, apparently. We all know how much Trump detests loyalty.

Furthermore, there are rather justified concerns among McMaster’s peers that Trump is exploiting the general’s stars and bars – that the esteemed military mind has been trotted out time and time again to excuse his boss’s reckless leaking of information to Russia, or to polish any number of other golden turds from the brilliant mind that brought us “many sides.” There’s a contention in play that Trump has tapped figures such as Mattis, McMaster, and Kelly to plaster over his own distinctive lack of military bona fides. Considering his most recent declaration of a new military policy went through none of these men, it’s hard not to agree with this vision of accomplished leaders being used as window dressing.

Only time will tell whether H.R. McMaster will remain in his current position, but it’s illuminating to see how many voices are calling for his firing – and how many conservative sources are recognizing that factional demand and questioning its merits. It’s the sort of division that Trump’s eternally incompetent White House can never divest itself of, for terminating McMaster will only open up more questions about how much Trump actually values competence over kowtowing. Don’t ask me how there’s room for any more such questions, or why the existing answer won’t still apply when the dust clears.